Will Technology Be The Downfall of Relationships?

Home/About me, random thoughts/Will Technology Be The Downfall of Relationships?
Previous Next

Will Technology Be The Downfall of Relationships? 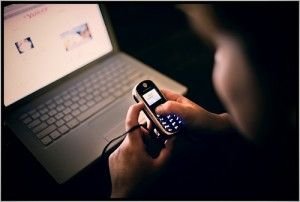 Don’t get me wrong…I love technology, but I certainly wouldn’t call myself an addict. The Captain on the other hand is extremely addicted. His biggest addiction? I’d say the internet. Most of the time it’s not a big deal. I honestly don’t mind that he sits in front of his computer at night while I watch the shows I want to watch. We get to sit in the same room and watch TV..and I don’t have to listen to him complain about what’s on. But this past weekend we traveled to Vermont, and I started to get worried as I saw the panic in his eyes when we lost cell phone service. That meant he was cut off from his precious internet, texts and phone. Oh the horror! I had no idea of the extent of this addiction…but I am beginning to worry.

As I thought more about it I realized it’s not only Captain Awesome that has this addiction to his “smart phone”. Yes, they are great, and keep you easily connected, but I am beginning to think that all this data at your fingertips is just leading to people not actually talking to the people that are in front of them. I have friends…won’t mention names….that will constantly have their phone out and texting while we are out. Who are you talking to? Do I bore you that much that someone who isn’t here is entertaining you via text more than I am in person? One text isn’t bad…or event two…but to constantly have your phone out is just rude.

In Vermont we finally got some cell service when we hit the outlets. Yes outlet shopping is like a slow death to men, but I couldn’t believe The Captain and our friend, who were both sitting next to each other,were  each on their phone constantly updating their football fantasy scores. It was like if they turned away for one second the world would end.

Texting while driving? A HUGE pet peeve of mine. Is what you have to say really important that it can’t wait till you are parked? I tell The Captain he’s going to kill me one day because of his texting. I know it’s morbid but it’s horrible! No if’s and’s or butts about it…when Pooh Bear is in the car there will be no texting.

I see people out at restaurants all the time on their phones. Even couples, where one of them is on the phone chatting while the other is sitting there. Yes, I will admit sometimes there are important phone calls, but let’s be honest…most of the time they aren’t. We have entered a world where people on the other end of a phone, or computer screen take over real life conversations. If this is how it is now, what happens when even more technology comes about? How about my children? I already see kids out with their parents watching videos on portable DVD players, or playing with their cell phones rather than speak with their parents. Is that what I have to look forward to? I’ve gotta be honest…this kind of scares me!

What do you think? Do you let technology get in the way of how you deal with people in real life?