Welcoming Our Little Boy To This World!

Home/baby/Welcoming Our Little Boy To This World!
Previous Next

Welcoming Our Little Boy To This World! 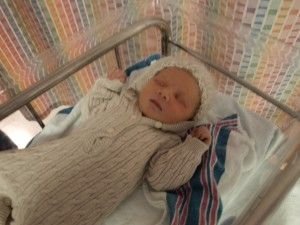 I am happy to announce that Captain Awesome and I welcomed our son, Christian into this world on Wednesday, December 1,  2010!! Eleven days EARLY!!! At 7 lbs, 11 oz, and 20 inches, our little Pooh Bear came into this world….and I couldn’t be more blessed and happy. He is just perfect!

I always wished that he would come early, but I never dreamed that he actually would. He actually listened to his mommy….It’s funny because if you read my last post on Tuesday I officially evicted him! Low and behold…11:30 that night my water broke!!!

It was a night like any other. I was 38 weeks 3 days and I went to dinner with 2 of my friends. I felt fine and even joked about how late I thought I would go. I came home, watched TV and went to bed..I was reading and finally turned off the light when I all of a sudden felt that I wet my pants. Now, it’s truly possible that that far along in pregnancy that I could’ve in fact peed my pants, but when I stood up more liquid came out…and to be honest it had a pinkish hue. I knew I had broken my water. I called down to The Captain and informed him that I thought I broke my water…You could see the panic in his eyes. He started up the steps and started to grab my hospital bags (just too cute). I informed him that we weren’t going anywhere yet and I had to call my doctor. After speaking with the doctor my instructions were to wait at home till contractions were strong and 3-4 minutes apart for 2 hours, and if that didn’t happen I was to go to the hospital at 7:30 to be induced. Around 1:20 the contractions began to get constant. I told The Captain to get some rest since it was going to be a very long day…not that I thought he could sleep but he did try. I laid in bed and used an app on my phone to time the contractions. Ouch! But not too bad…at 3:30 I decided it was time to go when they averaged between 3 and 5 minutes for 2 hours. So we said goodbye to our Tinkerbell, packed the car and went to the hospital. It truly was surreal to know that soon we would meet our son. It was time to go through the part of pregnancy I was terrified of the most….labor.

The night was very stormy. Of course we had to drive in the massive rain. (better than snow I think!) We checked into the hospital, and I was put in the bed. At this point the contractions were feeling pretty strong. I gotta tell you how much it stinks to have everyone and their mother continuously ask questions while you are in the middle of a contraction…very unpleasant, and it was only to get worse. After the initial exam I was told the very disheartening news that I was only 1 cm dilated…How sad! I had so far to go! I just wanted to cry. So we were left to wait…My first question? When can I get the epidural?

The contractions continued to get worse and to the point where I couldn’t speak while they were happening. Oh the pain! I had the worst back labor that wouldn’t stop even when the contraction had, so I had no relief in between. I had reached my pain threshold. I was ready to do pretty much anything to make it stop. I requested the epidural, and was told I had to wait till I was at least 3 cm along…the good news was that after examination I was just that. Epidural it was! The anesthesiologist quickly became the best friend I ever had. He was amazing, fast and efficient. He brought me the only thing that anyone could…relief!

I will honestly say that I don’t understand why someone wouldn’t get an epidural. They are totally amazing! For the next few hours I felt some peace. I even was able to take a nap! For those that are scared of getting the actual epidural, don’t be! Compared to the pain of contractions, the epidural is pure heaven. My doctor was quick and talked to me through it all and tried to keep my mind of what was going on. I was surprised to find that The Captain wasn’t able to be there to hold my hand, but I guess it’s understandable since they were working very close to my spine! I give the epidural an A++!!

Time just moved on…slowly I might add, but it moved all the same. Soon I started to be able to feel when the contractions were coming. No pain, but I could just tell. They told me I would know when it was time to push when I felt pressure “down there”…and at around 1:30 I started to feel just that. I told my nurse, and eventually my doctor came into check. I was worried that they’d tell me I hadn’t progressed, but instead I got the news that I was a full 10 cm and it was go time! I was terrified! I didn’t think I’d make it through. They told me that I could keep the epidural going if I was pushing good, and I was determined to do just that. There was no way I was going back to feel contractions. No way! So it began….

I will spare you the gory details. Those that have had children know what happened next…pain. For a while I was like “I can do this” because the epidural made things a little easier, but as it got closer to Christian coming out, the more intolerable the pain. I tried to quit a few times, The Captain can vouch for that. I kept telling my doctor he was a liar because they kept saying “your almost there”, but we just kept pushing. I pushed for about an hour and 45 minutes….and then the doctor called to me “Jen Look!” to which I said no..lol ( because until then I didn’t want to see what was going on down there). And he wouldn’t give up…so I looked…and saw the most amazing miracle. My son. On his way out and into the doctors arms. Very soon after I heard the most amazing cry, and knew that I had done it. He was finally here. The boy I carried in my belly for over 38 weeks. My little boy was finally going to be in my arms…and then he was.

Welcome to this world little Christian! We have many adventures ahead! I can’t wait to show you this world. You have so many things to look forward to.