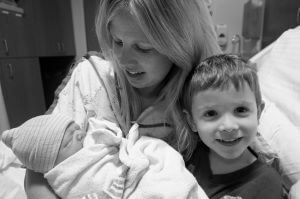 When I had our little man I remember vividly being completely amazed that they just hand you this baby and you kind of just “wing it”. I mean, you go through labor, are exhausted and then into your arms is placed a tiny human being who needs you for EVERYTHING, and you are kind of expected to just figure it out. I remember being completely overwhelmed. I am happy to say that although I was worried that after almost 4 years since having a newborn I would forget what to do, this time I was ALOT let overwhelmed. As a matter of fact this time around I felt a lot more confident as a mom of a newborn. I had hoped it was like riding a bike…..and I think it was!

I have to say three things added to the success of my first few days. The first being that baby Tessa was an amazing newborn. She latched as well as you could hope a newborn would latch to a boob that hadn’t gotten it’s milk in yet (thank goodness for a great supply of colostrum though!). She was quiet and content till she was hungry and went about 3 hours between feedings, which again is all you can ask of a newborn. The second was how amazing my son was taking it all in. I worried so much about everything involved with going to the hospital. I feared him waking up sad that I was gone. I worried he wouldn’t cooperate with the family who was in charge of watching him and he exceeded all of my expectations. He was such a good boy and when he came to the hospital he doted on his new baby sister. A huge weight was lifted off my chest when I knew that he was OK. The third was the fact that I had my own room. Being in the hospital was actually rather pleasant. It was as quiet as a hospital room could be…I had my TV…my own bathroom and my daughter stayed with me in my room so I could snuggle her anytime I wanted. When guests came I felt good that we weren’t bothering a roommate, and I was even happier that I didn’t have a roommate to bother me!

I remember with my son being so lost and scared those first days. Just even getting the hang of breastfeeding was a huge challenge, but since nursing my son for a year I felt like I knew exactly what to do with my daughter. I should say I am lucky that she took to it well, because I know each baby is different, but it still felt like something I knew how to do. Even picking her up and getting her diaper changed was so much easier this time around. 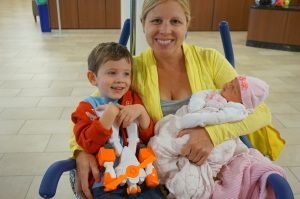 After two days I was so ready to go home. People say to cherish the time in the hospital but I couldn’t wait to get back home with my little man. I did have a houseful at home though. My family was in town staying with us, and I was a little worried how Tessa would do. If she happened to cry constantly I know I would’ve felt bad. She didn’t though. Actually, I felt bad that I didn’t really get to talk too much to everyone. My focus was on my daughter whether it was feeding, changing or just holding. I was thankful for the houseful this time around so that they could entertain my son. He loved all the attention!

Physically I was in pain, but that’s to be expected since I did just push a human out of my nether region! Emotionally, I think I was doing pretty well. I broke down and cried in front of everyone only once when they were all going off to a Greek festival when my son said to me “mommy are you coming too?” I had to tell him I wasn’t…that I was staying with his sister…and although he took it well, I knew that for the coming weeks there would be a lot of things I would have to miss doing with him while I was home with his sister. The days of it just being mommy and her boy were over…and I think that will be one my biggest challenges moving forward.

Other than that Tessa didn’t scream and didn’t fuss. The night time was standard. Feeding every 3 hours and then she went back to sleep. Best news was that her hunger cries didn’t wake up anyone! Not even our little man! Everyone got sleep (but me) (or Captain Awesome because I snored). I was feeling positive.

Although a whirlwind, the first few days were better then I could’ve asked for. My packed house kept everyone busy, especially Christian. Tessa was an angel, and I was feeling happy with how it all was going. Could things change? Of course…Could she turn on me? Sure! But we made it through labor and delivery, my time in the hospital, and my first few days at home with little to no trouble. And for that I am grateful!