The Decision To Do Nothing

The Decision To Do Nothing 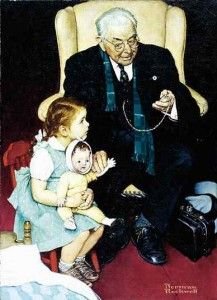 Thursday I had an appointment with my OB. I needed to have my 6 month check up anyway, and I figured it was a good opportunity to speak with my doctor about my inability to get pregnant, or I should say my frustration with not being pregnant yet. By blogging and being active in the TTC community I have been getting a lot of advice. To be honest, advice is much easier to take from those who have been through what I have, but wanted or not the advice has been coming in. Some people have suggested that maybe it is time to see a Reproductive Endocrinologist (RE), who specializes in infertility. I have been hesitant about taking that route because I still feel like getting pregnant is a natural thing for most people, and although I want it more than anything in the world, I want to give myself time to just allow it to happen. I went into my appointment with an open mind, and was ready with all my questions. I have to admit I was really happy when I started to push the issue about the RE that the OB smiled at me and told me he thinks I’ll be just fine. It was nice to hear.

I had been seeing the same doctor in my OB practice for about 3 years. He was always nice, and supported me through  my miscarriage. But sometimes I just felt like he rushed me, and when I would get home I would be frustrated because I forgot to ask something. So this time, I tried a new doctor (we’ll call him Dr. Patience). A friend of mine had just went to him, and said how nice and patient he was, and I thought that patience is what I needed. Boy was I happy to have met him. He was nice, personable, and best of all he took the time to hear me out and give me feedback. I have found that my OB office looks at pregnancy as a natural thing. He said most of the time the issue isn’t about infertility it’s just about timing, and I agree with him. He told me that since I got pregnant once, he is able to tell that everything is working how it should…that I ovulate, my tubes are open, and The Captain’s swimmers are ready to do their job. He said it may not seem like it now but that’s a good thing. Then he did something that made me smile…He said I know you feel like Marissa Tomei in My Cousin Vinny (here he began stomping his feet) saying “My biological clock is ticking”. But then he went on to remind me that I am still young and healthy, time is on my side, and that I can and will get pregnant. He said that he knows that it may FEEL like I have been doing this for years…but the average is 6 months, and that although some may get pregnant right away that is by no means the norm.

The statistics he gave me were amazing. I wish I could reiterate the numbers, but the percent of people who miscarry is staggering. What is more amazing is the fact that you have the same chance to miscarry a 2nd time as you do the first time. (I try not to think about this one) But with all the information given, I am happy to announce that The Captain and I have decided to continue on our present course. I am the type of person who will take people’s advice, do my own research ( ALOT of research), and then make my own decision. You’d be amazed at what I know about TTC.

My doctor made a great point when I told him about being active in the TTC community. I asked him questions about what worked for others, and about the advice I get from people who tell me stories about a friend of a friend….He reminded me of this…..everyone is different. What works for someone, may not work for someone else. He told me that he can sign me up for every test imaginable, but his opinion is that all the tests will show that everything is in working order. He asked…”do you want that stress?” And the answer was no!

In the end he left me with what he called the Dr. Patience curse…he told me whether I am ready or not I will have a baby in the next 15 months. He said I better not ruin his perfect record, and I told him I’d hold him to that. I left happy and confident in my decision to wait the full year before taking any other action. In the end all you can do is go with your gut right?