Struggling With The Loss of Nap

Home/About me/Struggling With The Loss of Nap
Previous Next

Struggling With The Loss of Nap 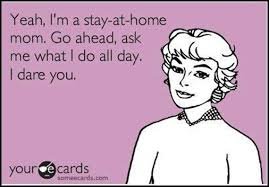 This winter has been brutal. There is no denying that. Pair the cold and snow with adjusting to being a SAHM of two and I will admit that I have been struggling a bit. For the longest time my son has napped. It was my time to regroup and have a moment to think without a chatty little boy chirping in my ear. I got to eat lunch in peace and do some work. It was great. Then it stopped. Then I got stuck inside due to winter and then I began to go a little bit mad. Needless to say I am struggling a bit.

Yes, I am lucky my son has napped for so long. I get that. I always said I would keep the nap as long as it didn’t affect his bedtime which was 8. When I was pregnant it was great cause I still got to nap sometimes and it was a few hours to regroup. I got my patience back and I got to be alone for a moment. Then Tessa was born. My son still napped but I had to tend to Tessa during that time. It was OK. The idea to nap when she does doesn’t happen (not like it ever did with him either) but she was an infant and could just sit and I only had one. I had a break from talking ninja turtles for a moment and could still eat my lunch.

Then he turned four. The magic number. It started the cold weather and night time became a struggle. He would keep getting out of bed and would toss and turn until 10 sometimes. The nap had to go. I was devastated. The days began feeling VERY long. How would I entertain him ALL day? Some will say “have him play himself” to that I say ya right….not my kid. And as the weather got colder and I was stuck inside more and more I began to wonder how I would do it. With one child in my lap during all hours of the day..lots of poopy talk…lots of action figure playing…and lots of “mommy I have to tell you something”‘s not only didn’t have a moment to myself…I barely had a thought to myself.

The Captain comes home at night and sees my struggle. I think he’s a bit worried about me. I am thankful that with out asking he takes over a bit and understands that dinner may not be gourmet (or take out) and the house is an absolute disaster. He’s even gone as far as to load or empty the dishwasher…big things folks! He plays with Christian the moment he gets home so that takes one kid off my hands. It helps.

I hate to complain because there is nothing else I’d rather be doing but it has still been hard. I struggle with no time in the day in which I can collect my thoughts. There was a 4 week period when one or both kids were sick, and school was either cancelled or my kid couldn’t go cause he was sick. We were just stuck inside….ALL DAY LONG…that was hard.

I am hoping the weather will turn soon. I am hoping fresh air will make it all better. I am hoping that we can go to the park and my kids can play. I am hoping to just go for a walk! As with everything else it’s hard to adjust to a new schedule. That is what we are doing, and we will get there….I just need spring I think….