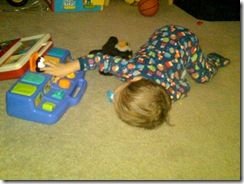 The other week my son had his first stomach bug, and this week brought us our first real fever. Although people keep reminding me that we will experience both of these illnesses many times over in the years to come, I just hope that it doesn’t happen again in the near future because I am not sure I can take it. Sick kids suck…mostly for them of course…but also for me. It’s been one really long week, and I think it’s going to take a lot of wine for me to relax the nerves this time around. Because after 4 days with a fever we are just hoping for a break….a break in the fever that is…

It all started Monday when I noticed the little guy felt warm. I was amazed at how easily I was able to tell with just a touch that he had a fever. I have decided that it’s a super power you get when you become a mom. It’s the only answer I can come up with….a superpower!

Monday night I was scared when he went to bed and couldn’t sleep. I woke in the middle of the night to check on him and he was burning…103.8 in the ear! I panicked. I scooped him out of bed to give him Motrin. I needed to get that fever down. He took it, and I rocked him….long story short after not letting me put him down, trying to get him to sleep in bed, and finally Captain Awesome playing the bad guy and putting him in his crib 2 hours later he was finally asleep.

At the doctor the following day we were told it looked like Roseola, a virus…so all we could do was wait. Poor guy suffered through the day with the help of both Motrin and Tylenol. It broke my heart to see him uncomfortable. When the fever was down he seemed OK. He went to sleep…slept through the night…and then woke with a 104!!! I was TERRIFIED! He was crying…I wanted to. I stripped him down…put on a cool cloth and prayed that the Motrin would begin to work quickly. It did…and he was fever free all day, albeit lethargic…but still fever free.

That is until Thursday morning….woke with a 102…just great. To the doc again we went, and after a CBC was still diagnosed with a virus/Roseola. I am praying the rash shows up soon. I am praying that tomorrow he wakes with no fever.

We have been so lucky that he has been a healthy little boy, so I really can’t complain about 2 illnesses in the past 14 months. But my heart breaks when he is so sad. He doesn’t understand the pain and comfortableness. He can’t tell me how he feels. All I can do is cuddle him and give him whatever he needs. Sometimes I wonder how I would do this with 2 children? All my time these past few days has been holding my son. I guess you just figure it out….

So I have been quarantined for 4 days….going a little stir crazy….but hopefully soon he’ll be on the mend. Fingers crossed! My little boy needs to be fever free.