It Would Be Easier To Let Him Run Amuck!

Home/motherhood adventures/It Would Be Easier To Let Him Run Amuck!
Previous Next

It Would Be Easier To Let Him Run Amuck! 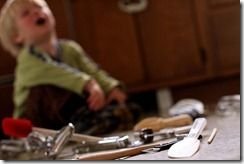 My son has always tested boundaries, and has always tried to be the boss, but at 20 months this is no longer cute or appropriate (it never was…but I kind of allowed it). Now, his “freshness” is becoming tiresome, and it’s time to show him that I am the boss. But every time I get stern and put my foot down my blood pressure rises…I get very annoyed…and I just find myself angry when he doesn’t respond like I want him to. I know I am teaching important lessons, but to be honest I think it would be easier for me to let him run amuck…

How about the other day for example. Our battles were over a dog bed, another kid’s sippy cup, crackers, and cleaning up his toys. None of these instances were over anything serious, but his complete lack of respect needed to be recognized. When I nicely asked him to do something he either threw something, or yelled NO! The easy way, and the way I handled things in the past was to just ignore and move on. Pick your battles was my motto, but that doesn’t seem to be working for us anymore.

The problem is that when I get stern and discipline I find myself so angry with his response. It’s really a stressful day, and takes a lot out of you! I gotta admit I was happier just moving on from his tantrums, but I know in the long run that’s not the way to handle it. Unless, that is, if I want a rude and unruly kid. I guess it’s my job as a mom to deal with the stress for the good of the kid. He needs to learn respect for others. I don’t want an ill-behaved child.

I don’t want the role of disciplinarian, but I don’t think I have a choice. It’s me and the little guy day in and day out so since I am the person he is with the most it’s all on me. These are the times I wish I had a nanny to do it for me. She can be stern and set the rules, and I can give the hugs. Until then I am left to do both. Wish me luck!

What are some discipline techniques that worked for you?