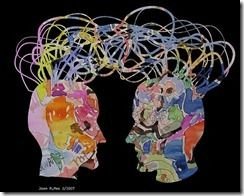 Each week and even each day my son is trying more and more to verbally communicate with me. He hasn’t always shown and interest, but now that he is trying, it breaks my heart when he tries so hard to tell me something and I don’t know what he is saying. It’s frustrating for me, and even more so for him, and little by little I think we are creating our own little language.

It takes time, and a lot of repeating, but I am now hearing “words” come out of my little boys mouth. I am not sure anyone else would know what he is saying, but I do. So I guess for a little while I will be his interpreter for others.

For example “ju ju” is juice. I am amazed when he will randomly look at me and say “ju ju” and I will know that he wants juice. I then think to myself “wow, me and my little man had a bit of a conversation!” “Uh” is UP, and the “EEE” is used when he wants you to give him something. My doctor told me that one is him saying “me” like give it to me. That one has been used a lot these days. Yesterday I heard him tell me he wanted “ya ya’s” to eat but I have yet to figure out what that is. He ended up choosing a cereal bar at that point, so I am not sure if is a “ya ya” or not.

Other then our very few words, he still chooses sign a lot. He can say a lot more that way and gets very excited when you know what he is saying. Either way I am ecstatic that we are beginning to communicate better, rather then me just talking at him. Now I feel like I am talking TO him and I love the interaction.

The mommy/Christian language is a work in progress and has a long way to go, but it certainly is building momentum. We all know I love to talk so having someone to talk back to me is just a bonus!