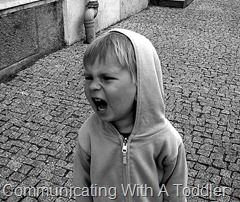 I recently posted about how difficult it’s been to communicate and learn my son’s new found language, and how each day I am trying to figure out exactly what he is telling me. Because like most toddlers, he knows full well what he is saying…it’s just the rest of us that are behind. Now the new challenge is what happens once I do know what he is saying. Captain Awesome and I have found ourselves having to say this a lot… “Yes..we know what you are saying, but we are still saying NO!”. See he doesn’t get that just because he has successfully communicated that he doesn’t always get what he wants. I guess that is all part of living with a toddler?

I love the look in his eye when he realized that he said something..and I knew what exactly it was that he said. He gets so excited and happy. Especially when I agree to what it is that he wants. The look changes when he says what he wants and I don’t run and do exactly what he says. That look quickly changes to frustration.

I guess every day is a lesson though. I have to teach him that just because I know what he wants doesn’t mean he always will get it. What does that leave me? It leaves me with a tantrum throwing 18 month old, which usually leaves him standing on his head on the floor screaming. The dead weight drop to the floor is my favorite technique for him to use, and my back always thanks him at the end of the day.

Just like every other step I can’t wait till my little guy talks. Most likely once that happens I will wish for him to shut his mouth, but what can you do. For now I get to play a little hardball and teach the little guy who’s boss. Don’t I sound tough? Well I’m not! That’s the problem! So I have to establish my dominance now. Wish me luck!