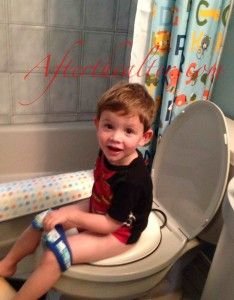 Let me start off by saying that I can only talk about my own experience. This post is by no means saying that what I did was better than what you did, and as always I am a firm believer that as moms we each can only do what works for us….phew…glad that is out of the way…with all that being said, I just wanted to say that I am super happy I waited to potty train my son. I couldn’t be happier with how things are going, and thank goodness the transition seems to have been a positive experience for the both of us. I have been terrified for so long with hearing so many horror stories that I cringed just thinking about it, but it’s good. All is good, and for that I am thankful.

I feel like when you child gets to be a certain age you begin to get pressure from those around you who “feel” that it’s time for your child to stop wearing diapers. There are friends who’d kids sat on the potty at 2, and family who think that you just need to throw all the diapers away and go in head first. But I didn’t believe we were ready for any of that. I even fell to peer pressure and started to potty train before I thought my son was ready and it was a total failure. He was stressed, and I was stressed and I am glad that I went with my gut and quit.

I was lucky enough to not feel any pressure from schools who said he needed to be potty trained by a certain time, and as a SAHM the burden of the diapers pretty much solely fell on me, and to be honest I couldn’t care one bit. So I waited. I am also happy that my pediatrician supported my decision. Like me she believed that it was a milestone that my son had to reach on his own and couldn’t be forced. I was happy to have that back up. So I waited.

Although I couldn’t say for sure, I had hoped that when my son was ready he’d tell me. I wanted him to tell me he had to pee, or that he wanted his underpants instead of the constant fits when I even mentioned it. The fact that he would whine and cry even when I suggested the potty told me that it wasn’t time. My pediatrician told me I’d know when he was ready….so I waited.

Then one day my son agreed to put on underwear. Just like that. So we went with it! The accidents were few and far between, and after a little over a week things were pretty much smooth sailing. I couldn’t believe it! Don’t get me wrong. The poop in the underpants was probably one of the worst things I experienced with the end result of me throwing out the whole pair (ewww who even wants to wash that!?) I had to keep on top of a different reward system every day because one day he’d want a treat, and the next a small toy, but I went with it. I believed his success was truly something to be celebrated, so that’s what I did.

And it just happened…just like that. And it was great! I’m not going to lie…finding bathrooms places isn’t always the funnest thing in the world, and I still admit diapers are pretty awesome, but it was time. I can’t believe my little boy is out of diapers. Is it weird that it’s hard to accept that? I can’t believe he’s potty trained, and it’s all over. The thing I dreaded for so long is over, and turned out to be a success.

So for me I am happy I waited. Even though he was over three it’s what worked for us.