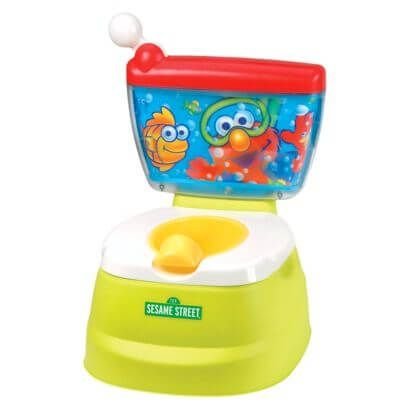 Day two has been a whirlwind of a day. It was a day that started with me feeling so up and positive and by the end, just about ready to throw in the towel. I can tell you that as of this moment at 9:45 pm I don’t know how I will be proceeding tomorrow. My gut says he’s not ready, but there is a small part that thinks he is just lazy. I am not sure if I can tell the difference, and I wonder if it’s even worth it to try to figure it out.

First thing in the morning I did my best to get him excited about potty. We got up and put his underwear on right away. We did what I didn’t want to do from the beginning. Put the potty in the den. But it’s what he wanted so we moved it, and he sat there…and sat there…and sat there. I kept offering drinks like the told me so I knew it was only a matter of time before peed. He was playing, and ran to the potty. SUCCESS! We danced, we sang and he was sooo proud! I was too!

After that brought a lot of nothing. He didn’t go any more after that because we had swim lessons and I put on a pull up. After swim we came home (his pull up was wet) and although he tried to sit on the potty and go…he just couldn’t. So we entered nap with one success and then squat.

After nap brought a back slide. He refused to sit on the potty at all. He woke up with a wet pull up and I knew he wouldn’t have to go for a while. And he didn’t. He kept yelling “no potty”, and wouldn’t even try. I honestly have no idea why.

The Captain came home and the little man wanted to play. We knew that it was only a matter of time before he either went on the potty or an accident happened and The Captain REALLY didn’t want that accident to happen while they played. But time went on, and nothing happened. So I served dinner outside, and during dinner I was talking to the little guy only to see a PUDDLE of pee show up under him. He just kept talking…he didn’t even care that he just peed himself! It was a PUDDLE! I was like…Sweetie, you just peed your pants. And he looked down. He didn’t care one bit!

Now what? It’s a huge part of potty training be that the child doesn’t want to be wet? Isn’t a first major step that they realize when they pee their underpants? I’m talking a puddle here people. I know accidents happen. I really do. But I really feel any success we’ve had has been luck, and out failures have shown me that it doesn’t bother him one bit if he wets himself.

So what to do next? I told myself I’d do three days, but at this point I am leaning towards waiting. Is he being lazy? Maybe. But I am going back to my belief that if he was ready he would be able to tell me when he has to pee. I don’t want to stress him out and I don’t want to stress out myself. The only driving force to make me try is that it’s summer. But is that enough? I don’t think it is…

So I’m not sure. I may take a gradual approach. Maybe I won’t stay home for days…maybe we will talk potty and underwear at home, and pull ups while out. And wait. Wait for him to tell me he WANTS the potty.

Who knows…he will get there. If it were up to me we’d stick with diapers, but I know that’s not the right thing to do. Or is it? At least until he knows better. We will see.