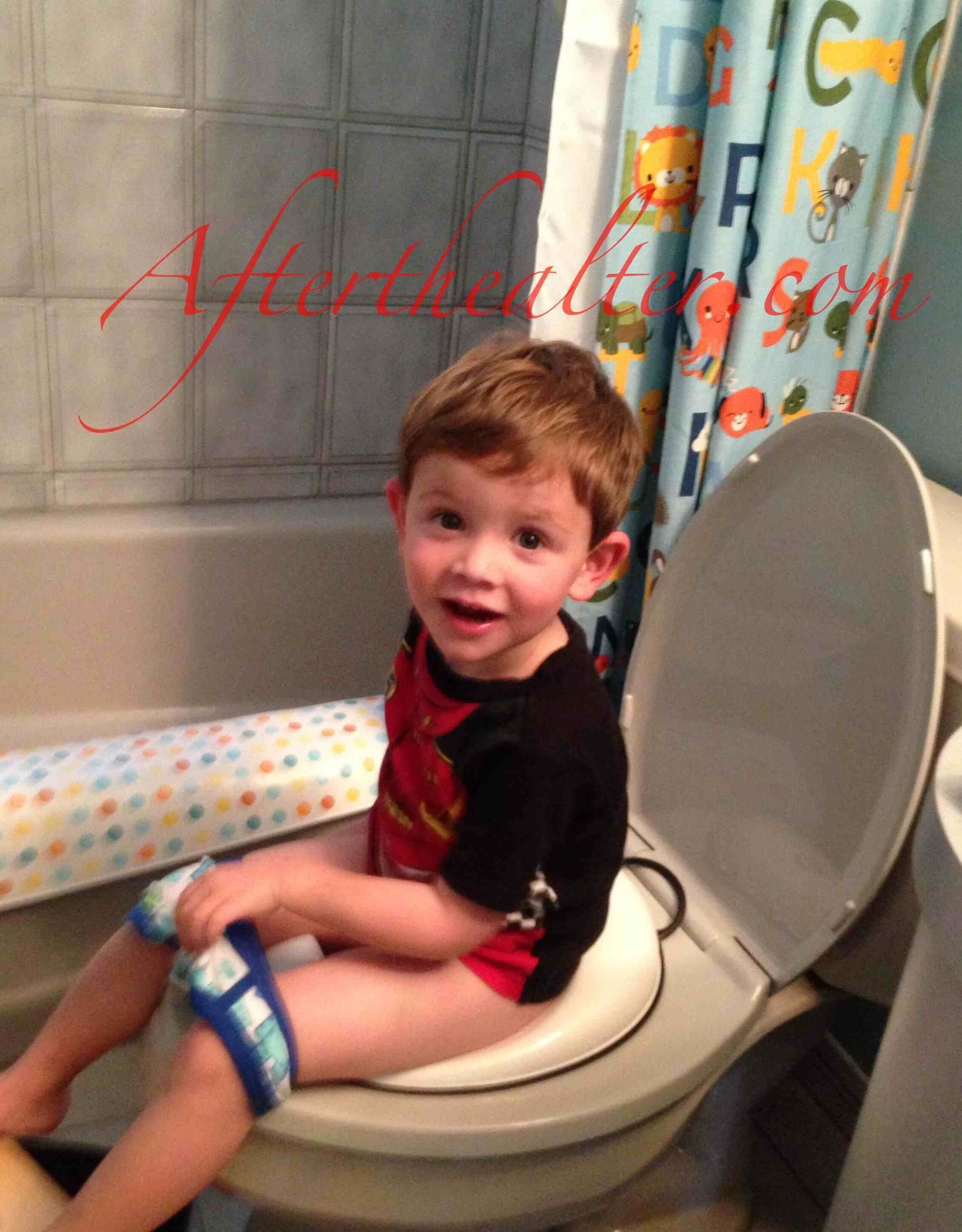 I always knew there would come a time where I would have to potty train my son, but I can’t believe we are there…maybe. I have heard and read about so many different stories, methods and theories about potty training that I am probably more confused than anything. I am not 100% positive that he or I are ready for this, but I would love it if we could at least attempt it while the weather is still warm. Therefore, I have decided this week to be the week that we give it a real try. This week I will give my best effort to get my kid to WANT to go on the potty. I will do my best…but I am not sure that will be enough.

I wasn’t sure what he would take to so I armed myself with a few potty tools.

2: The Baby Bjorn Potty in blue (he picked it)

4: A ton of Dollar Store prizes: He would get one per success.

5: A Potty Sticker chart: 1 sticker per successful potty use. After 5 successes I told him he could pick out a toy.

No matter how the next three days play out I plan to remain positive. I say three days because that is the number I have in my head that should tell me if he’s even close to being ready. If we have zero success or zero interest still after the third day I will wait a few more months.

I am not going with any sort of “method”. I will call this the “Jen Method” because I am pulling from other things I have heard and making it up as I go. I started the morning off by putting him in his underwear (which he was excited about) and set the timer for every 30 minutes. He was happy to sit on the potty but he wasn’t going. Then I would pull him off the potty..offer an M&M for trying and ten minutes later he would pee. Or…he wouldn’t pee and I knew he would pee before the next 30 minute timer buzzer so I started doing ever 10 minutes. That didn’t work either. So I decided that this day would be dedicated to allowing him to pee all over the place to show him what it felt like when he has to pee. He could sit on the potty all day but if he doesn’t have to go what am I proving? I need him to know when he has to pee. And even if he can tell me the moment before he pees the floor I would consider that a success. As I write this at 2:45 pm we have 5 accidents and zero successes with a lot of trying in between.

The good news about the accidents is that at least he knows what it feels like when he wets himself. He now tells me he is dirty when he pees or he wants the “baby potty” and looks down and sees the pee dripping down his leg. Through it all I remind him that it’s OK.

After nap he woke up dry (I had him in pull ups) and he used the potty right away! Success! He asked to play the Cheerio game after dinner (We couldn’t play “aim at the cheerios” but he liked to throw the cheerios into the toilet and say bye bye..hey it kept him on the toilet!). We again had a success! But soon after he couldn’t pull himself away from playing to hit up the potty so we had an accident.

He is EXTREMELY prize oriented. I told him he couldn’t get a prize unless he actually peed so he would sit on the toilet…waiting. I felt so bad for him. He wanted those 5 stickers so he could get a big prize sooo bad. Food is definitely not a motivator. He could care less about that..so I will stick with prizes. Whatever…bribing is OK with me.

Overall on day one we had 6 accidents and 2 successes. Seeing him smile with his success made the accidents all worth it. I can’t say if he preferred the “baby potty” or the potty seat more cause he used them both equally. The good news is that he loves to try. He would sit on the potty forever, bad news is that I don’t think that really is what we need. We need him to be able to tell me he has to “go”. So I am not convinced he is ready.

We will see what tomorrow brings! Overall I’m feeling kind of positive??