Home/About me, health/Flu Shots
Previous Next 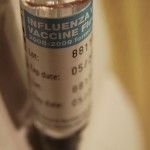 I am a big fan of medicine, and instant gratification. If I have a stuffy nose I will use Afrin. If I have a bad cold and I can’t sleep I will use Nyquil. If I have a headache than I will take an Advil….do you see the trend? My husband on the other hand will not take medicine at all. NONE! Therefore we are having a bit of a battle over the Flu Vaccine. Is the flu vaccine a good idea? In short, in my opinion 100% YES!

Last year was the first year that I ever got a flu shot. I always questioned whether it was worth it or not, but last year my husband got the flu, and guess who didn’t? ME! Yes getting the shot hurt my arm, and made me feel a bit sluggish and achy, but as stated above I am a fan of medicine and if this shot will prevent the flu then I am a fan. My husband on the other hand refuses to get the shot. Just the other day a friend of ours with a baby (who is a doctor by the way) told us that no one who has not had the flu shot will be allowed around his kid. He said it is just too dangerous. I joked with my husband and told him he will get cut off from the kid if he won’t get one, but he still doesn’t want one. He doesn’t believe in them. As much as I respect that I am still left to think about how other people’s choices then affect ours. For example if he chooses not to get the vaccine, he could in turn give our friends kid the flu…a kid who is too young to get the vaccine.

This year I decided I wanted to get the shot again. Only this time, I had to do a little more research. I heard that women who are pregnant, or who want to get pregnant should get a different shot than what is normally given. So I called my OBGYN to ask what I should do. I was told that I should request a Mercury Free flu shot…only problem was that my doctor was only giving them to women who were already pregnant. I was told to call my primary phycision. When I did this I was told that they are only giving the shots that have the Mercury in them…I was not pleased. Personally, I feel that if the mercury is harmful to women who are pregnant, then how good can it be for everyone? I asked what I was supposed to do and they couldn’t give me an answer…seriously?? I can’t be the only woman in this predicament?? I was trying to be resonsible and do the right thing…but no one was allowing me to do it. So I spoke with my mother in law who is a nurse and she said she heard Walgreens is giving out flue shots…so I checked it out and boy was I Impressed!

Walgreens is offering BOTH types of flu shots! For the standard flu shot they are charging $24.99, and for the Mercury Free Flu shot it was $29.99.  It was certainly worth the extra couple of bucks for the type of shot I wanted. I felt better for having made this choice.

Who Should Get Vaccinated This Season?

According to the CDC website, this is who should get vaccinated for influenza

In general, anyone who wants to reduce their chances of getting the flu can get vaccinated. However, it is recommended by CDC and the Advisory Committee on Immunization Practices (ACIP) that certain people should get vaccinated each year. Most of these people are recommended for vaccination because they are at high risk of having serious flu complications or they live with or care for people at high risk for serious complications

People recommended for seasonal influenza vaccination during the 2009-10 season remain the same as the previous season:

Alot of people go back and forth about whether or not it’s good to put stuff in your body. Personally, I am still unsure of the Swine Flu vaccine and I have yet to make a decision about that, but I am pleased with  my decision about the flu shot. I spoke to many doctors and nurses who all feel that it is important to get the shot, so I choose to believe them.