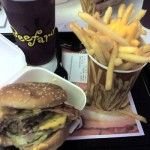 A friend of mine made a statement a little while back, and this statement always comes back into my head when I feel guilty about eating something bad…”nothing tastes as good as thin feels”. And wow…isn’t that the truth!? I have a very bad stomach and had one for years. I saw doctors and a gastroenterologist and in the end I was told I had IBS (irritable bowl syndrome). For a while I thought that I was meant to live my life with an upset stomach.. a stomach that gave me acid reflux and horrible bathroom issues. But when I began weight watchers before my wedding, I found that all my stomach troubles went away! Poof!

There is no secret formula for losing weight and being healthy. You either have to burn off the calories you eat by excersising, or you can be like me who refuses to excersise and have to eat well in order to lose the pounds. While on weight watchers I found that by eating well not only did I drop weight, but I also felt good! My stomach didn’t hurt and was so much less bloated… it was great!

Fast forward to post wedding, when I no longer had a goal of looking great in my wedding dress, and I fell off the wagon. It didn’t happen all at once. It turned out that after eating healthy for so long, that eating fatty and greasy foods actually HURT my stomach. At the time it was kind of a blessing. Now, with out the short term wedding goal, I am quickly easing back to my old ways. At first I told myself I would eat healthy during the week…and cheat on the weekends. That worked for a while…but now, after my stressful summer I was back to chicken rolls and frozen pizza during the week. There is a direct correlation with eating bad and my acid reflux, and eating greasy fast food and my bathroom issues. It STINKS! I know what causes it and I still do it! WHY?!

It’s just a state of mind. When I was eating healthy it was just a lifestyle change. Once I made it over the 1 month mark it was easy. Did I miss eating fast food? yes…but what I didn’t miss was feeling like crap afterwards. And I found that I actually enjoyed the healthier foods. Choosing to eat egg whites with turkey on an english muffin is a rough choice (for me)  over a bagel with cream cheese…but I will admit that the egg whites and turkey were very tasty…so why can’t I make that choice? Because bad food tastes soooo good!

This post will now act as my public vow to work on eating and feeling better. I vow to cook healthier meals during the week…and if I must cheat, I must do so on the weekends. Some may ask why I am allowing myself to cheat..but the answer is it really IS unrealistic to vow to never cheat. Trust me..when I did Weight Watchers I didn’t even touch a french fry…and I certainly reached my goal..but man was it great to eat those fries when it was all over!