Americans: Blaming Everyone But Ourselves

Americans: Blaming Everyone But Ourselves 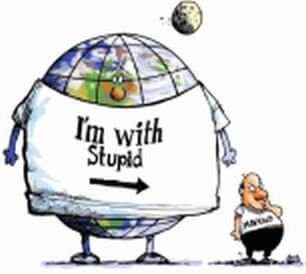 I’m going to go on a little rant here. I can because it’s my blog so here we go. I want to say something to Americans..myself included. I know I have a small readership, and not many “Americans” will actually read this but I have to get it off my chest. IT’S TIME TO CHANGE THE WAY YOU LIVE YOUR LIFE! STOP BLAMING ALL YOUR PROBLEMS ON OTHERS…TAKE RESPONSIBILITY! There..I said it.

I am no expert but I have a feeling we as people have more power than we think when it comes to certain things going on in our country. They say “obesity is an epidemic”. Yes it is…but I have a little fact for you. It’s NOT McDonald’s fault that you or your child is fat. IT”S YOURS!

You think that the world is just filled with crappy reality TV and the papa razzi should stop hunting people down? Stop watching those shows, and stop buying those magazines! If people didn’t watch and buy there would be no reason for them to produce that crap? Makes sense to me!

Mad at companies like Abercrombie for selling only small sizes and Victoria’s Secret for selling sexy thongs for young girls? Then guess what? Don’t shop there! Be a parent and teach your daughter that sexy thongs are not age appropriate and if everyone banned together against Abercrombie for their theories then the store wouldn’t exist. Businesses are there to make money…MONEY TALKS PEOPLE! If you take away the money they will quickly change their tune to accommodate.

I guess this belief makes me a Republican…but I am a firm believer the government is not going to save this country. It’s the people that need to save it. There is a Housing crash and people can’t afford their houses? I have an idea…maybe don’t buy a house you can’t afford. You don’t have 20% to put down? Then maybe you should rent? The idea that every American has the right to be a homeowner is Ludacris. It’s a privilege. My Grandma and Grandpa worked their AS$’s off and lived with my Grandma’s parents for at least 8 years before they paid CASH for their little house. They took pride in that house till the day they died…something to think about right?

I think Americans (myself included) have become so entitled to what they “deserve”. But we don’t DESERVE anything unless we work for it. People don’t deserve Iphone’s and laptops, and videogames. Stop using credit cards. If you can’t pay cash you can’t afford it. And to go even further? You definitely don’t NEED it.

I could go on and on. I am a culprit of feeling entitled to things regularly, but I do my best to put myself in check. The things we have we work hard for (well…I work…and Captain Awesome works even harder). If we all realized that we could actually change something maybe we would. So go for it. Stand for something…It’s time for American’s to change their tune…