Yes, That Woman Is A Mom

Home/About me/Yes, That Woman Is A Mom
Previous Next

Yes, That Woman Is A Mom 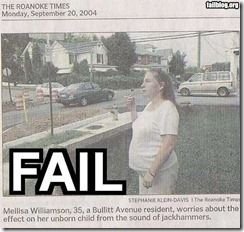 The other week I was watching an episode of “How I met your mother” and I had to laugh at a scene where they show Lily in college stealing beer and jumping through the window of a getaway car. When she did this the narration said “Yes, that woman is a mom!”. That narration really hit home for me because there are so many people in my life whom I knew to be a bit wild in the olden days. As a matter of fact Captain Awesome and I may have been those people. Him more than me, but I can pretty much bet there is someone out there that question….huh? Those two are parents???

Those that knew me in college knew that I liked to indulge a bit in the party scene. Some may say that I majored in McHebes (a local college bar).  Those that knew Captain Awesome would say that he may have enjoyed it more than me, but I believe that the two of us made an even match. It was post college where we kind of split, and I sped to the more “responsible” route quicker then he did in regards to our extracurriculars. Of course he toughed out law school well enough, but as I started to feel those late nights a bit too much, The Captain was still able to hang with the best of them. I won’t go into the details, but let’s just say that each of us has had our share of embarrassing late night stories. Him MUCH more then me because he still may have a few stories here and there to this day, but there has to be some out there that question our rights to be parents.

Ok, I jest. Once I got pregnant and even before that my escapades came to a halt. I would like to believe both Captain Awesome and I are very responsible parents, but that doesn’t mean that I don’t judge others out there that I know/knew. There are sometimes when a facebook status pops up about someone having a kid and my mind instantly questions whether or not that it’s a good idea. Should that person really be raising a member of the next generation? Then I have to tell myself that I too have been a member of society in good standing for the better part of a decade, and therefore that person probably is too. We all grow up don’t we?

Forget about being parents, I also laugh when I think about my friends and people I know who now run this society. I know police men, fire men, lawyers, doctors, and the list goes on. This makes me wonder what my doctor used to be like. Should he really be treating me? What was he doing last Saturday night? So next time your in court, or see a doctor ask yourself….Was he out last Saturday night making White Castle runs like Captain Awesome?

So don’t judge. It’s not nice…..with that being said I promise you I will not be following my own advice. I judge people all the time, and so do you. So if you are looking at my posts on facebook here is my response… “YES I AM A MOM!”