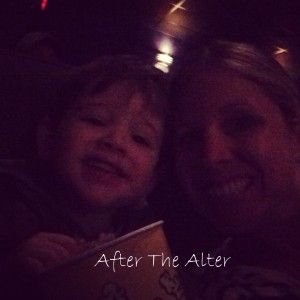 My son doesn’t sit still for two minutes, and that is why I have waited so long to even consider bringing my son to a movie. If how well he sits during a movie at home is any indication of how he would in the theater, then there is no chance of us making it through the entire movie. That was my thought…but with long cold days of the holidays upon us, we decided it was time to give it a try. Not to mention the fact that I was dying to see the movie Frozen, and what better of an excuse to go see it than bring my son. You are dying to know how it went aren’t you!?

I didn’t listen to a friends advice (shame on me!) and showed up at the time of the movie. Therefore we had to sit through all the previews. He was happy in his booster seat, and got pretty excited when the previews began. Of course he had his own tub of popcorn to keep him occupied, and that was good enough for him. We decided to go to an early 10:30 movie. It was the PERFECT time for us to go. Not too close to nap time, and the theater was filled with a ton of kids, so if things went wrong I knew all would be good.

The movie began and he sat…..then he sat some more…and he even sat some more! He kept putting my head on his shoulder saying ” I love you mommy”, and asked questions semi loudly but other than that he was an angel! He made it till there was about 30 minutes till then end then asked to sit on my lap, but I had anticipated that action so much sooner. As a matter of fact I didn’t even think we’d make it till the end…but we did! Near the end he kept asking “we go home after this” but what can you do?

Frozen was great! It didn’t disappoint at all and I loved it. Will it be classified as one of his all time favorites? Probably not, but it did keep his attention and that is the most important thing if you ask me. Some may ask why I brought him to a “girl movie”, and my answer to you is this….in my opinion it doesn’t matter. He likes Cinderella and The Little Mermaid and I think that’s just great. I probably wanted to see Frozen most of all, but then again I do love me some Disney Princess movies!

It’s good to know that he was able to sit through is first movie in a theater. There are a ton of Disney movies coming out in 2014 and I am happy to say that I think we can go see them. Especially during this cold winter. The 10:30 movie time could make for a good weekend morning activity.

So we did it! My son saw his first movie in the theater. My mom always tells me mine was Peter Pan, and now my son can always remember his was Frozen.

What was your first movie?