Finally! We Are Going To Walt Disney World!

Home/Disney/Finally! We Are Going To Walt Disney World!
Previous Next

Finally! We Are Going To Walt Disney World! 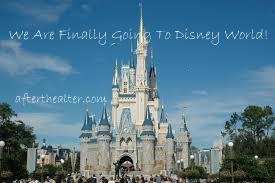 You may not know this about me, but sometimes I can get as excited about things as a four year old would. One of those things that always makes me act as a child is Disney. I love Disney movies, I love Disney characters, and I love Disney World. It is a magical place and for as long as I can remember I have dreamed of someday bringing my child there. I have been pushing it for a while with a little hesitance from The Captain (let’s face it…he didn’t want to go). But this year I finally won! I have worn him down and this May we will be traveling to Walt Disney World in Florida, and I couldn’t be more excited.

I had semi convinced Captain Awesome to go to Florida last year, but then I became pregnant and we decided to wait till the second child was older and we planned Aruba instead. Then, as we all know, that fell to SH$% and it all was a moot point, and our little man was left with no Disney memories. So this year I won. I twisted his arm and finally The Captain begrudgingly agreed. I wouldn’t accept his argument that our son “won’t remember” the trip because I believe the enjoyment I will get out of seeing him experience Disney trumps that argument. So I win.

You can start making your dining reservations six months in advance so we are already behind in the planning game. We are booked in a moderate resort at the French Quarter. I went back and forth over wondering if the value resorts would be “just fine” for what we were looking for, but after talking with our travel agent we decided to go up a step. I dream of staying at the Animal Kingdom one day, but I don’t think it’s worth it at this age. It’s ALOT more money to move up to the Deluxe hotels, and for the amount of time we will be spending there I just didn’t think it was worth it.

I have another post coming out shortly detailing what we chose in terms of our advanced dining reservations (or ADR as the Disney pro’s would say). But I can preview that by telling you that some of the places were already sold out!! For those of you who are not planners like my husband I recommend trying to get on board with how things are done at Disney, or else you will miss out on some things that you thought you really wanted to do. If you don’t want to be disappointed plan in advance. If you don’t care…then you can wait…but I know I didn’t want that to happen to me.

I haven’t been to Disney in years. The last time may have been in 2005 when I went with my mom and brother to watch my sister perform down there with her dance team. At that time Animal Kingdom was new! Fast Pass was just starting, and now, you can book your Fast Pass rides 60 days ahead of time! Can you believe it? I have to decide which 3 rides I want to ride most in each park 60 days in advance….or be stuck waiting in line forever. I like to plan…but wow…it’s a lot to think about!

I am not sure what I think about planning our every move in advance, but it seems to be how they role at Disney. My question is how will I know where I want to be on which day? Or how will my son’s attitude be on those days. Will it rain? Will we want to go to the park we’ve already chosen on that day? Who knows!? But I will have it planned, and if I am honest I will admit that I love it. It will occupy me over the next few months.

My son will be at such a great age, and he will get all of our attention. With no siblings yet he gets to experience Disney with one on one mommy and daddy time. I know Disney can be stressful, so I am going to “go with the flow” as much as I can (if The Captain is reading this he is laughing because I am soooo not a go with the flow girl). It may not sound like it based on my previous statements about planning, but a cranky child doesn’t sound fun to me so I won’t push him too much. If he wants to nap I’ll let him nap, if he’s cranky we will just go back to the hotel. What will be will be….or so I say now.

Bottom line? I can’t wait!! Do you have any Disney Tips?