She Is Free From the Crib

Home/Milestones/She Is Free From the Crib
Previous Next

She Is Free From the Crib 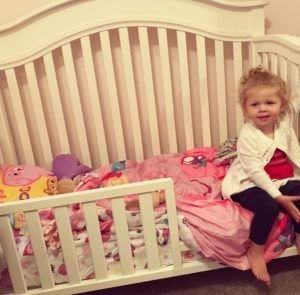 We passed a point of no return. I am not 100% sure why I was so open minded about making the switch from crib to toddler bed, but what’s done is done. I found my son jumping from his crib at 20 months so horribly hard that I thought I would have to mentally prepare myself to do it for my daughter. It turns out that in one day we just made the decision to say “OK”, and went with it. So it’s done. The crib rail is down, and my daughter has her freedom. OMG!

I so very much remember opening my eyes one morning to my 20 month old son next to my bed looking angry and saying “down”. Like “wake up mom….I’m up and ready to go downstairs”. It was a hard adjustment not only because he was so little, but because it was a change I wasn’t prepared to make. My daughter on the other hand has always liked her crib. She affectionately calls it her “Pakiroom” and I found it adorable. Sleep has never been a struggle, and neither have naps. Life has been good. We floated past two and then two and a half with not a mention of her wanting to get out on her own. So why did I do it? Is Just Because a reasonable answer?

My mother in law called me the other day before the kids were supposed to sleep over and asked if I was OK with Tessa sleeping in a toddler bed at her house. She was worried doing so would make her want to sleep in one at our house. I knew that would be the case and pretty much said OK anyway. Why not? So of course after a night in the “big girl bed”, she had to have one here too. I didn’t hesitate and said OK. That morning Captain Awesome took off the crib rail and together our family went to Walmart to pick out special sheets to use on her first night in a big girl bed. I was surprised with the Peppa Pig choice, but the choice was hers to make so we went with it.

Nap and bedtime so far seem to be going well. I have convinced her that she must call me if she wants to get out and that has worked. It kind of takes away the point, but for now at least it’s keeping her in the bed and not wandering at random times. Soon enough I will tell her she can get out when she wakes. So it’s been smooth in that regard. Of course I am an emotional wreck. I mean wow….my baby is no longer in a crib and most likely I will never again have a baby in a crib in my house. How the hell did that happen? Don’t get me started on the fact that she wants me to read to her in the bed and not in the glider that we have cuddled in for almost 3 years…and with my son in it years before that….that will be another story indeed.

So it’s going well! I mean I guess it was time right? I always felt that I would keep her in the crib as long as possible but maybe that time is now? Maybe it’s not about jumping out, but about her ASKING to come out. Now that she can ask, isn’t it time? I do hope so because I like that she sleeps. I like that she likes her bed. I just hope it continues!