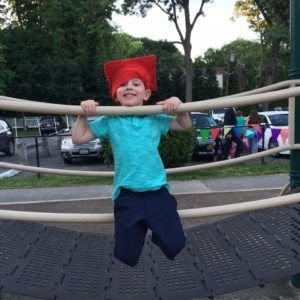 He did it….I did it….we did it….our son officially graduated from preschool. I recently posted about my son graduating preschool, and it officially had come to pass. He stood on stage wearing an adorable hat, we watched his slide show of the 3 years he attended school, he sang the songs that he practiced every day, and I watched him be so proud. He stood up there with his friends, and as I smiled and snapped pictures I held in the tears because I knew if I cried I would take away his joy. Why? Because my little boy worries about things and if he thinks I’m sad he too will be sad, and I couldn’t have that. So I smiled and I clapped and I held it together……and he finished preschool.

I always say I have a little peter pan because my son never wants change, and doesn’t want to grow up. He cries at his birthday, and cried about leaving preschool. I want to curl up with him and cry too, but somehow him being so sad pushes me to be strong for him. The morning of his graduation our little Tinkerbell ran away and I was devastated. I called on the whole community to help find her, and after 2 hours of her being gone, me thinking she was dead, and wallowing that there was no way I could lose my friend of 11 years on the same day my first born graduated, she came back. Thank God. In the end It can be a memory of the day…..it was such a rough start, but nowhere to go but up.

One of the saddest parts of graduation was that it was to be the last that the school would ever have. I went into Centerport Methodist thinking I’d be going through their halls for 6 years between Christian and Tessa, but that isn’t the case. I watched him sing his graduation songs and it was hard to know that I wouldn’t get to hear her sing the same ones in the same room. I loved watching him stand there with friends that he has had for 3 years. Not all kids get that. By watching the slide show I was amazed at how much he has grown….how much they all had. If I thought about it too much I would’ve lost it, so I didn’t let myself focus on that.

I am a coward because I left without really saying goodbye to the teachers. Yes, I did so at school, but not at the graduation. I just couldn’t. It’s funny how they became such a part of my day. 4 days a week I would walk him into and out of school and see them. Because of facebook we would chat about what I had posted, and I felt like they knew our family. Even the teachers he had in the years past and ones he never got the opportunity to have. All were amazing. That’s what the school was about.

But he did it. Summer is here and for years to come he will be in school but none of it will be preschool. Although I will try to be involved in his school it will never be like preschool. Life is filled with a lot of firsts and lasts. I am sure I will feel this sense of loss so many times over the course of the years. But for now this will feel like a big one for me. Onto new things!