He Lost His First Tooth!

He Lost His First Tooth! 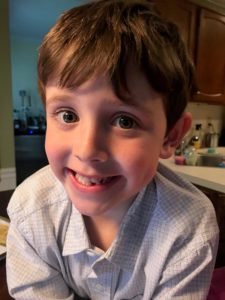 I remember when my boy was 9 months old that his first tooth started to sprout. It was a bottom one and at the time for his young months I blamed every bad mood on teeth coming in. It wasn’t till 9 months that it was actually the case! Now, at almost 7 1/2 years old that same boy has FINALLY lost his first tooth. He’s over the moon about it, and although I am super happy for him, I can’t help but think about the fact that his baby teeth are now falling out.

He has been super jealous that he was behind the curve in the tooth loss department. He’s one of the oldest in his class, but one of the last to loose his first tooth. For so long there wasn’t even a wiggly one, but then, in April over the break I felt his loose tooth for the first time. It took a while for that sucker to finally be ready to come out, but he worked tirelessly at wiggling it at every possibility. The 2 bottom ones were both wiggly, and being so close together we knew that once one fell the other wouldn’t be far behind.

I am behind in writing this, but two weeks ago he lost it. How did he lose it??? I pulled it! Yes, his mamma pulled out his first tooth! I went in to feel it and just popped it out. I wasn’t planning on it, and it scared us both, but out it came! Luckily, I was prepared with the tooth fairy pillow I took weeks to find and purchase. It was a cute little pirate one (not too girlie) and we were ready for the fairy. What was the going rate? $5! What do you think? Too much? Too little?

So it begins. My boy will be a toothless wonder soon enough. Since it took me so long to write this post (about 2 weeks) he has now lost his 2nd bottom tooth! Two teeth total with no other ones wiggling! That’s OK. He is super adorable and I’m not ready for that little mouth with big teeth. Wasn’t it just yesterday he popped his first one?