Home/motherhood/Ma Ma vs. The Ma Ma
Previous Next 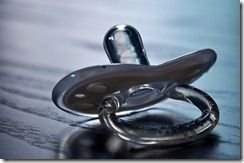 My son uses a pacifier. It’s funny because for the first year of his life he could take it or leave it. I would give it to him when he slept, and maybe when he was fussy, but it was never something he searched for. Then, after I stopped nursing at the year mark things changed. It was then that he became should we say “addicted” to the thing. Soon after that he began finally calling it something. I called mine the nuky, my sister was a kiki, and others would call it a binky…but not my son. My son chose to call it something that most people, including myself find confusing. My son calls his pacifier the Ma Ma.

It took a while for me to figure out what he was referring to. Obviously he calls me Ma Ma, so you can see where it gets a bit confusing. He would be changing ma ma…ma ma…ma ma…and I would say “yes dear”, but he would continue the chant. After a while I realized that he would say it over and over again when he was referring to his pacifier. So I finally put two and two together. Both me and his pacifier would forever be a similar thing.

Maybe it’s because he thought it to be comfort like nursing? I wish I could ask him why he likes to call it his ma ma. Sometimes he would drag the “a” out so it sounded a little different…but its not much. I truly believe he is distinguishing the two words in his mind. He looks me straight in the eye while I am holding the pacifier and asks for his “ma ma”. Odd….

These days he calls it both his ma ma and sometimes will ask for his “wa wa” (no idea why he added that to the mx). It’s funny to explain it to people. They would say “awe…he’s calling for you”. To this I have to explain nope…its not me…he calls his pacifier his ma ma. I always get weird looks when I say this. They fumble with their words and I make them feel better about being confused because I feel the same way.

So we have to differentiate between Ma Ma (me) and The Ma Ma (the pacifier). I think it’s cute he came up with his own word, but I still think it was a weird word to choose. But it’s cute. He loves his Ma Ma and soon enough I will have to take it from him. It will become a funny thing we talk about when he’s older.

What did your kid call their pacifier?