In The Spirit of Full Disclosure

Home/About me/In The Spirit of Full Disclosure
Previous Next

In The Spirit of Full Disclosure 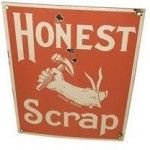 I was reading a post on 2 kids…3 martinis  in which she posted 10 Thing about herself. At the end she said if you were reading this post to share your own 10 things…so that is exactly what I am going to do! I am not the most interesting person in the world by far….but I think I can come up with 10 things that people may not know about me! So here goes!

1: I am extremely afraid of the dark. I am 29 years old and still sleep with a nightlight.

2: I sleepwalk frequently and always have. I think this adds to my fear of the dark. I wake up mid dream and don’t know where I am if it’s too dark…then I am scared.

3: When I was 15 my eye pretty much hemorrhaged. I called it my Terminator eye because that’s what it looked like. I visited many doctors who were unable to tell me why I was unable to wear my contacts…the way they described my eye was that I had moguls on them (like skiing moguls) It almost went as far as being put in medical journals. I almost even had to go to the Will Eye Institute! Luckily it fixed itself…and I wasn’t a medical marvel!

4: My Sigma Sigma Sigma sorority Pledge name is Tesh…like John Tesh from entertainment tonight. When I was a Freshman in college I was on the Hofstra news and that’s where the name came from. For years everyone called me Tesh. Some people didn’t even know my real name…and some to this day might read this and say…Her name isn’t Tesh? Even my husband recently started calling me by my real name…but I like it and find it endearing.

5: I am allergic to poison ivy. When I was in fifth grade I was doing a girl scout project and was cleaning up a weed infested area at the Burnside Plantation in PA. I got poison ivy so bad all over my face I pretty much looked like Freddy Cruger. It was so bad my parents kept me home from school…and when I did finally go to school one of the kids called me toxic waste face…as you can see I am still hurt today by this…kids are just mean.

6: I almost got kicked off the set of the Montel Williams show. I was there on a trip I planned through Hofstra’s “summerfest” program and our small group got sat right up in front on the stage. After the first commercial break Montel came over to me and my now husband himself and politely told us that I was wearing white and my skirt was too short. The camera was shooting right up it…so we had to move. I was pretty embarrassed and sad that I had to move…I guess that’s what I get for wearing inappropriate clothes!

7: I danced at the Citrus Bowl when I was about 15 years old. Our high school cheerleading team got picked. It was a great experience to dance on the field!

8: When I was 14 I did a ten day wirlwind tour of Europe. I visited, London, France, Switzerland, Austria and Germany. It was amazing. My only wish is that could do it again and see everything with more mature eyes. It was such a wonderful experience and I am thankful my parents allowed me to go.

9: At Hofstra I was Sigma Sigma Sigma Sorority president. I loved every second of college, and most of that was due to the fact that I was in that sorority. We had the best time. I wish we got together more often.

10: My claim to fame is that I hung out with the one and only Vanilla Ice!!! Oh ya! I went to a local bar in PA where he was performing and my friends and I were asked to eat dinner with him and his group after….we then went back to his hotel for a party! Ok…so this was like 10 years after “ice ice baby” was popular…but so what! It was Vanilla Ice! lol

If you are reading this consider yourself tagged! I am not a huge fan of picking certain people to tag because I think it leaves out other bloggers who may want to participate! So once you share the 10 things about yourself, please comment over here and let me know that you did so that I can hop on over to your blog and learn more about you!