Giving Up The Wa Wa

Home/motherhood/Giving Up The Wa Wa
Previous Next

Giving Up The Wa Wa 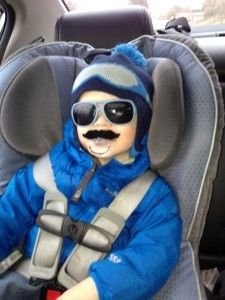 Disclaimer picture from a while ago…

Yes my son has a pacifier. Yes he is four and yes I am aware it’s a big mom fail. Whatever. My son loves his wa wa and cries if you tell him he’s too big. It’s heartbreaking but recently he has been going to bed with out I and I am hoping it will phase out without drama. May be wishful thinking but I do not have it in me to take it away. I just don’t. I know it’s wrong, I do, but everyone has their limitations and this is one of mine.

My son didn’t care much for the pacifier till he turned one and I stopped nursing. It was then he calld it a ma ma which then turned into wa wa. He had it all the time till he turned 2 1/2 and then we only allowed it at nap and bed. He loved that thing and looked forward to nap and bed because of it. So we allowed it. As a SAHM nap was my savior and I refused to take away the one thing I believe had my son napping daily till he was four. Now….he doesn’t nap.

As I said I can’t tell him he can’t have it. I just can’t…I’ll cry. The Wa Wa represents my baby. I can’t handle a big event of taking it away. I’m sorry. I have offered bribes and tried the wa wa fairy but he tells me it’s his favorite thing in the whole world and cries so I back off….don’t judge.

Then a few weeks back when he was sick it broke. See he only uses one. The blue one, and now it’s cracked. He says “It’s OK Mommy I can still use it”, but it doesn’t work any more.

Then, this past week he has gone to bed four out of seven nights with out it. I don’t say anything and when he’s asleep I put it on his nightstand just in case we have a freak out at night and nothing. To me that’s a success. It means there is hope of a “phase out” that I am hoping for.

When he asked for it this week I told him he has gone with out it and doesn’t need it. Instead of telling him he’s too big (which makes it worse trust me) I have been telling him his teeth will move which seems to get him thinking. I tell him none of his friends use it and then we list all his friends. That too gets him thinking.

I think we are making progress, but tonight as I checked on him before he went to sleep I found myself crying. Why? End of an era I guess. Like I said the wa wa represents my baby. The other night he reminded me of all the times he needs his wa wa like when he’s sick. It’s such a comfort and soon my baby won’t have that. So I cried.

I know it’s time…I know he’s too old but it makes me sad. Let’s just hope it happens easily or I will have to move out for a week and have Captain Awesome deal with it, because a mommy sobbing before bed time is not helpful.