Home/fashion/Frumpification of America
Previous Next 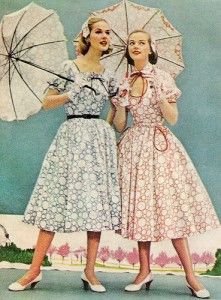 A while ago I was watching an Oprah episode that featured Tim Gunn from Project runway, and he was doing make overs. During the show Tim made a comment that really rang true to me. He called it “The Frumpification of America”. He said “If you want to look like you want to be in bed all day then you should stay in bed!” I laughed, and then looked down at myself and cringed. I was wearing sweatpants and an over sized sweatshirt. Am I adding to the frumpification of America??? 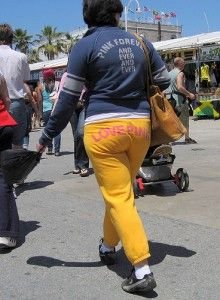 The answer is YES I AM! What a horrible realization! I did a post a while back about my love for sexy, soft underthings. This post spoke of my love for anything soft and feminine underneath my clothes. But what about the clothes on the outside? Isn’t that important too? I have ZERO excuse as to why I wear comfy sweatpants and sneakers instead of form fitting clothes and high heels. Actually, I take that back…I love to get dressed up, but not to just sit around my house. But what about those housewives of old that used to wear pearls as they cooked?  How about the days (or so I’m told) that people used to get dressed up to go on an air plane? Now, when it’s travel time I throw on the comfiest outfit I have just so I can bear sitting in that uncomfortable seat for a few hours. But what changed that made it ok to dress down?

I think I’m getting ahead of myself here. So I will step back and look at this situation. When do you think it started happening? When did it become ok for a woman to throw on her biggest and baggiest pair of sweatpants, a big ol’ shirt, throw her hair in a messy bun on top of her head and walk out the door? I don’t think you can blame it on being a housewife..I mean women were housewives for years longer then they were in the work force. Look at my grandma…she worked, raised kids, cooked and even had time to wash and iron all her drapery regularly ( I know this because they are hanging in her closet marked with the day they were washed and ironed) To this day the 88 year old woman’s house is cleaner than mine! But she always looked nice. No sweatpants for her!

So I decided to call her…she reminded me that women didn’t even wear pants in those days! So you were pretty much forced to look semi put together in a nice dress with comfortable heels. Maybe the sensible heel needs to come back in fashion? (was it ever in? Or maybe women didn’t care so much) Or maybe it’s the fact that television is such a prominent part of our every day life? Back then there was no sitting in front of the TV. You were up, dressed and being productive all day.  I mean if you were even going to come close to following “The Good Wife’s Guide” that appeared in a 1950’s Housekeeping monthly, you had to be nothing but put together! (ok so the guide is pretty unrealistic, but it WAS published)

I decided to hop around the internet a bit to see what I could find. In my travels I found the site The Retro Housewife. What a fun site! Here she talks about lots of trends over the decades, but I found the fashion portion really interesting. If you click on each decade of fashion you will see how much it changes. I think it all began in the 60’s when it became more acceptable for women to wear pants…Then the 70’s brought women’s liberation and the pants suit…and I think if you want to pinpoint the real downfall you have to blame the 80’s. And the rest as they say…is history.

I get that the fashion they show in magazines is almost unrealistic…I mean am I really supposed to wear a stiletto heel every day like Carrie Bradshaw? But there has to be a happy medium. I am a HUGE offender of the frump, and need to change my ways. So who’s with me? It’s time to unfrump America! What are some of your sweat pant alternatives???