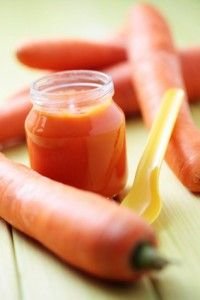 As a creature of habit, I always find it scary and confusing to try new things with my baby. As always, our schedule is constantly changing, and therefore, I must be flexible (which can be difficult!). One part of our day that I am finding extremely frustrating is the food. As excited as I am to share new foods and textures with my son, I also get frustrated daily with accommodating what my son wants. He certainly has a mind of his own when it comes to food, and I am left playing a guessing game to figure out what it is he actually wants. I am trying my best to make all of his baby food using only organic foods, but it certainly is frustrating when he doesn’t want to eat it. I am beginning to realize I can’t do it all.

This past week we added lunch into our daily schedule. With adding lunch means also adding a protein into the mix each day. That means chicken, beef, turkey, lentils, yogurt….all new tastes, and all new textures. I decided to start with chicken, so I pureed my own. I was so excited to give him this new food…that is until the first spoonful. Or I should say the spoonful that never was. One bite and he knew it wasn’t for him. With his mouth closed and his head turned he refused my chicken. The next day we tried to mix it in with foods he liked, but he wasn’t to be fooled. Not my man. Again he pursed his lips. I finished the first few days of protein trials frustrated.

I decided to buy some Earths Best jar foods that have the protein in them. If the texture of my chicken was too much, I was hoping that the jar food would be smoother. It was. He gobbled it right up! As excited as I was that he actually got some protein in, I was also frustrated because I knew it had some added ingredients in it that my chicken would not. But some protein is better than none right? I spoke with my pediatrician and she agreed. So for now jar food protein it is. Eventually he is going to need to learn to eat food with texture, but for now it can wait.

Another frustrating thing about food is when to feed it. He is now getting breakfast, lunch and dinner along with 4 breastfeedings. That’s a lot of meal times, and figuring out when he actually will eat is another challenge. My son won’t eat if he doesn’t want to, and he won’t eat a food he doesn’t want. As of now he refuses to eat breakfast before his morning nap. No matter what I do he won’t eat till after he has napped. This isn’t the best for me because after his nap we sometimes have places to be with no time for food. Obviously I make the time, but it’s not ideal. Also, he has been refusing to breastfeed, or eating very little at the 11:00 feeding. But if I wait much longer to feed then he won’t eat lunch????

Don’t even get me started on lunch. Other than the protein problem, we also have a guy who likes a food one day, then not the next. The other day I had to try 4 different foods before he’d eat one. After green beans, bananas, and squash he finally agreed to eat prunes. Frustrating!

I think the  hardest part is accepting that he has a mind of his own and is not on my schedule. He now has his own schedule, and his own idea of food. He now likes and dislikes foods and textures, and I just have to work with that. I think I have many more years of him not always doing what I want..lol…ahh the joys of motherhood!