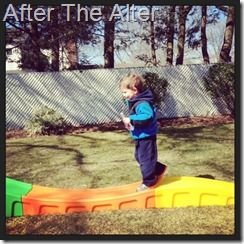 The other day I asked some friends if their kids were able to play by themselves. I was frustrated because my son chooses not to. I am involved in almost every play activity through out the day, and sometimes that’s tiresome. But then I got to thinking about my frustration. Why am I rushing it? Soon enough he won’t WANT to play with his mommy, so I should enjoy the time that I have now. Why rush the time away?

2 years ago my son was born into this world and I held him all day. I provided his nutrients through breastfeeding, I rocked him till he fell asleep and there wasn’t many moments he wasn’t attached to my body. As time went on he began to get more independent. It started with being able to sit on his own…eventually he could eat food on his own, and finally after the first year I no longer provided his main source of nutrition through breastfeeding. He was growing up.

Crawling and walking were big additions to him gaining more independence. By doing those things he was able to get from place to place with out my help. This was both good and bad for me, but that also meant that he no longer stayed where I put him.

We have finally come to a point where I can be in a different place than he is and feel like he won’t kill himself. I allow him to be downstairs when I am upstairs and vice versa. In our new house he loves this freedom. It makes him feel like he has a say in what he does and I can tell he likes that a lot.

But I don’t think I realized how quickly it all happed until I thought about it. Right now I know just about everything that goes on with his day. I am a part of it all, but soon he will start preschool and that will no longer be the case. Two mornings a week he will have a whole few hours that doesn’t include me. How can that be? I know to some it doesn’t sound like a big deal, but to me its HUGE! And then I’ll blink and that two mornings a week will turn into three, and then it will turn into Kindergarten!

So I’m glad I took a pause from my frustration. Sometimes it’s important to sit back and think about things so you can appreciate your day more. As frustrating as it is sometimes I am truly blessed to get to play with my son all day. And like I said, soon enough that won’t be the case…so I will try to enjoy it while it lasts. Before I know it, it will all be over.