One Year Ago: BFP: The big day

Home/pregnancy/One Year Ago: BFP: The big day
Previous Next

One Year Ago: BFP: The big day

I can’t believe it’s been a year since we found out that we were going to be parents. One year ago I found out that my dreams were going to come true. With that BFP came, excitement, fear and uncertainty. With one previous loss, I was terrified to be excited, no matter how much I thought I deserved it.  One year ago my son was only a few cells growing in my belly. Today, he is my little man and the biggest joy of my life. Yet again I am reminded of what a difference a year makes…

This post was originally written on Thursday, April 1st, when I got my BFP on the digital. I wrote this down because I knew The Captain wanted to keep it a secret for a while, but I wanted to share my thoughts. Just like my previous post…if you know me in real life please don’t post anything on facebook. Thanks!

It was 5 am and I woke up having to pee. I knew it was imperative that I take the test with FMU (first morning urine) so it was now or never. I laid in bed terrified to test. The day before I tested in the afternoon with a cheapo test and saw the faintest of lines. Faint enough to think I was crazy. But they say a lines a line so I decided it was time to stop playing games and I bought a digital. That is what was waiting for me in the bathroom. A digital test. I knew I wouldn’t be able to fall back asleep so I finally got up the courage and stumbled my way into the bathroom. I decided to pee into a cup so that I couldn’t screw anything up (trust me, I have messed up tests in the past). I unwrapped the digital test, popped the blue cap and the screen was blank…WHAT? DAMN! It’s broken! So I got the second one out of the package, popped the blue cap…and nothing again! SERIOUSLY? See the other digitals I have used in the past have a blinking sign to show that the test was ready to use, so I sat there thinking that it was God’s way of telling me not to test. I couldn’t believe it? Is this a joke?  So I grabbed the directions and saw that it’s SUPPOSED to be blank! Jokes on me! (can you just picture me at 5 am doing this?) So I put the pee stick into the cup for the right amount of time…it starts to blink…and I wait. I have taken tons of HPT (home pregnancy tests) before, and all of them have left me feeling the same. Nervous, excited, and sick to my stomach. This one was no different. The difference with this test is that the words PREGNANT stuck on the screen after a few minutes! I couldn’t believe it! I mean I knew it COULD happen…but why would it? It hadn’t for the past 6 months…but this one was different! It worked!!!

Now I know The Captain is by no means a morning person, but I figured there was no possible way I could keep this to myself. No way indeed! So I jumped in the bed and shook him till he woke up. He was obviously startled and mumbled something about wondering who died..lol (overreact much?) And then I shoved the positive test in his face. You see, the last time I was pregnant I put the positive test into a father’s day card (since I tested positive on June 5th close to fathers day). I used to think of clever ways to break the news to him…but not today. After 7 months of trying, just having the test read PREGNANT was special enough in my book…so  a test shoved in his face was all I could muster that morning. I think he got the point. He was excited….but I think nervous. We’ve had our hopes up before…only to get them crushed so I know why it’s important for him to be gaurded. But we are headed in the right direction. Getting pregnant is the first step!

Needless to say we both couldn’t really fall back to sleep. We both laid there tossing and turning, but we pretty much just laid there. Since it was 5 am there was no real celebrating…like I said The Captain is rather crabby at that God forsaken hour…but that’s ok. I celebrated inside. I started to plan, I started to hope, and I started to pray that this pregnancy would be a healthy one. I thought to myself…Here we go again! 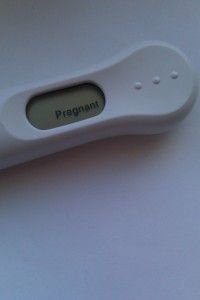