Home/About me, holidays/4th Of July Weekend!
Previous Next 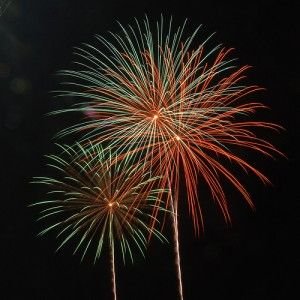 I can not believe that it is July already! The summer months go by way too fast for my liking. Especially since I’d be happy with this type of weather throughout most of the year. (well maybe not this hot)  But that’s not the case for us North Easterners…so we have to take what we can get….June, July and August. For some reason I see July 4th as the beginning of the end of the summer. From here on out I have a feeling things will be going pretty quickly! My weekends are filled with plans, and I have lots to look forward to with little Pooh Bear, so I am sure that the next time I turn around it will be September. But like it or not July 4th weekend has come and gone, and that means it was a nice long weekend  filled with great outdoor weather and BBQ’s! Not to mention it’s The Captain’s FAVORITE holiday! His family hosts a large 4th of July BBQ with fireworks and all. What a nice weekend!

I decided to make it a very long weekend and took Friday as well as Monday off. The joy of my job is that I can do that, but still take care of any work that needs to be done. I knew there would be nothing needed since the 4th of July week is usually dead work wise. So Friday afternoon I met up with some friends, grabbed some lunch and ate and hung out out by my little community pool. Summer is a bit different this year without being able to indulge in cocktails. My neighbors were ready for a little happy hour around 5:30, and although I could sit and partake in the chatting, I could not partake in the nice beverages. Definitely a little different than summer’s past. I have a long way to go so I better get used to it!

Saturday was spent running errands with The Captain. You are right to think that it doesn’t sound very exciting, but to be honest nothing else was going on! Our pool was totally packed out which made it not really worth going, and our friends seemed to be doing their own thing. So we did the responsible thing and ran some much needed errands. (look at us being all adult!) Saturday night I had a real nice dinner out, and outside with The Captain. Afterwards we met up with some friends for drinks…in my case water….on the water. It was so pretty there! Lots of nice boats! I’ll give Long Island a little credit here (which won’t happen often), it does have some great places on the water in the summer to enjoy food and drinks.

Sunday is the annual 4th of July party hosted by my inlaws. Although it was hot, anything is better than a rainy 4th of July. This is Captain Awesome’s favorite holiday. The BBQ is filled with food, fun, people, and fireworks. They definitely do a great fireworks display (although to be honest I’m not the biggest fan of fireworks…they kind of freak me out).

Monday I was kind of bummed because The Captain was able to go on a friends boat and I elected not to go. I personally feel it’s not safe for a pregnant woman to be on a fast moving boat. Especially one being used for water skiing…so I got to stay home instead. But I gotta protect my Pooh Bear right???? Instead I spent the afternoon poolside in the heat with my friend. It was a nice afternoon, but boy was it HOT!!!

The nice long weekend has now come to a close…on to the rest of the summer!!! I hope the weather stays sunny!!