Home/motherhood/Watching Him Play
Previous Next 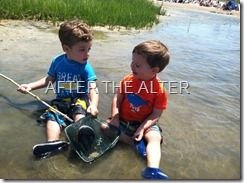 These days I am in awe of watching my son play. He has never been one to care about toys all that much, and he doesn’t have a favorite anything (other than his bunny of course), but now that he is getting a bit older I love to watching interact with other people, kids, toys and activities. I honestly can’t get enough of it.

Since he isn’t in day care or around other kids day in and day out I do my best to put him in social situations as much as possible. We do classes and set up play dates and I think I do a good job of allowing him to be social. One perk of being a SAHM is that I get to watch that social interaction grow each and every day. I get to see him “learn” how to play with others, and I love to watch that development.

One of my best friends has a son who is 5 months older than our little man. As they both get older, the age difference between them seems to get less and less. I just smile as I watch the two communicate in their own language. They still mostly do “parallel play”, but they now recognize each other are there, and they are beginning to covet each other’s toys! Sharing is a lesson we are slowly learning, but I find it so funny to watch them interact.

It’s not just watching him with others, it’s watching him play by himself. I laugh when I watch him talking to his toys or his books. It’s like he has a private joke with all of them, and I am an outsider looking in. I try to stand back now and let him play alone. It’s important for him to have that skill, and I love to see him find toys that he showed no interest in in the past.

Even a few weeks make such a difference. One week I bring him to a sprinkler park and the water freaked him out. A few weeks later and he was running through it all like it was the best thing EVER! I find myself just standing back and smiling through it all.

Having a child allows you to see the world with new eyes. The wonderment of everything is so exciting and I feel so blessed to get to experience it all with him each day. I guess playing is such a normal and mundane child activity, but for me I see so much growth! My little man is growing up….and I’m just along for the ride…