How Do You Teach The Right Lessons

Home/About me, motherhood/How Do You Teach The Right Lessons
Previous Next

How Do You Teach The Right Lessons 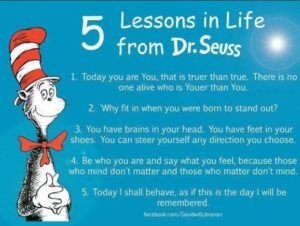 Today my son came home and said he cried on the playground. I asked him why and he told me he cried because one kid forced him to play with another kid that he didn’t want to play with. First I told him no one can force you to do anything…..and then I asked why he didn’t want to play with the other kid. He actually had a decent reason for why he didn’t want to play with this other child, and then I got stuck. How do we teach our children to be good people? Most of the time, in day to day life I feel like I am raising my son to be good. Then, there is a moment, or a question he asks that reminds me that I know nothing. How do you put into words what’s right? And the trouble is that words aren’t enough, and to be truly honest sometimes we aren’t all meant to get along, but it certainly doesn’t sound right when you say that…..so what do you do?

Later at bedtime when he brought it up again, I said to him “the most important thing is to be kind”. I felt like that was a good message. But then he pressed…he told me that he didn’t like to be bossed around by this other kid. I thought to myself. “he doesn’t have to be friends with everyone?” How do I say that and still teach him to be kind? I tried to tell him that it’s OK not to want to play with someone, but you never should be mean about it. I thought that was fair, but he didn’t really understand my words. It was hard. How do we teach kindness, but still understand that its OK to not be friends with all?

This isn’t the first time I felt lost with questions. I have a feeling it’s only going to get worse. I am so happy that my son tells me things and asks questions. But the pressure is on to teach him right. I am a big believer in “lead by example”, but kids don’t always pay attention. Sometimes it’s unrealistic to believe that our kids will be friends with all and be all inclusive. Are we as adults? No…..so I think kindness is a great goal.

I just want to say the right things. At this young age he is so impressionable and is like a sponge. He picks up our words and repeats them back at the funniest times. Captain Awesome regularly hears himself come out of our sons mouth. It’s amazing how he copies him. I don’t think we as adults realize how much we are seen by our kids. It’s almost as if it’s osmosis because I don’t believe for a second they are actually trying to do it…they just do.

I don’t want to screw up. I don’t want my son to be mean, and I also don’t want him to be taken advantage of. I smile through his accomplishments and cry over his sadness. Kindergarten is a tough world my friends. I had no idea how different it all is. Listen…I am truly devastated that someone called his Mickey Mouse cup a baby cup…and therefore he asked me not to send it to school anymore….WTF!? But that’s another post….for now I am trying to do my best. I am trying to answer questions in a way he understand, and that is true. I guess I’ll just follow the words of Dr. Seuss??? Bottom line? This mommy job is hard and it’s only the beginning. I have a lot more life lessons to teach and I just hope I am up for the challenge.