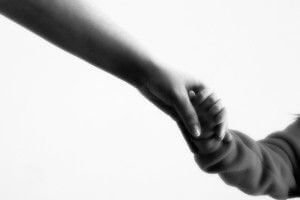 Before having my son I had always heard stories of little boys telling their moms that they wanted to marry them. But never could I have possibly imagined how amazing and special it would be to hear it coming out of MY little boys mouth. There is no rhyme or reason to when he will say it, but when he does he looks at me straight in the eyes and says “mommy, someday I’m going to marry you…OK?” This is the point where my heart melts and I smile. I give him the biggest hug and tell him “of course sweetie”. But I know only too well that this sentiment is fleeting, and that soon enough that little boy who wants to marry his mommy will no longer feel that way. So I am loving every second of it.

He said it at dinner the other day in front of The Captain and he said “you can’t marry your mommy…I am married to her”. To this my son said “why not? I love her so I am going to marry her.” To him it was that simple. He loves his mommy and that is what marriage is about. The other day I caught him with my engagement ring on his finger (yes the panic set in!), and he said “mommy someday I’m going to give you a ring when I marry you.” After nicely taking the ring back I gave him the biggest hug. What do you say to that? I can’t disagree with him. What’s the point? I could try to tell him that someday another girl will take his heart, and most likely there will be many girls that take his heart before THE ONE that he gives a ring to. But why? At 3 1/2 I am lucky that he only has eyes for his mommy….and I will take it.

It was just yesterday that the said “mommy, someday I am going to marry you” and grabbed my hand so I would get off the couch and he wanted to dance with me. He grabbed both of my hands and we twirled around the living room. You can imagine what a special moment it was. I wonder where he learns this stuff? I will have to show him my wedding video someday. When he sees wedding pictures he gets upset cause he wasn’t there. To him there was no life before him…sometimes I wonder if there was!

I wish I could capture it on video. The real moment that he says it. Not one where I tell him to say it to the camera because the look on his face is just too sweet to forget. It’s probably best that I keep this moment locked up in my mind because I have a feeling I won’t be able to bear it someday when he’s older. I don’t think I can see my little 3 1/2 year old boy saying such sweet things and knowing how quickly that time came and went.

For now I will just enjoy the special innocence he has. In my heart I can know I was his first love and probably will need to remind him of that in the future. Now that I think of it maybe I should video tape it so that I can show it to him and his future girlfriends….won’t that be nice of me!?