Home/motherhood/Saying Bye Bye To The Baby Bed
Previous Next 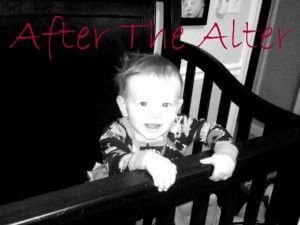 My son is almost 3 1/2 years old and since he jumped out of the crib at 20 months old he has been in his toddler bed (crib converted to a toddler bed). In my opinion we have been rather lucky in the sleep department once we got over the initial hurdle of the crib jumping incident, and since he has been happy in his bed we haven’t rocked the boat. Now, we have a baby on the way and my son is sprouting up quickly, and I thought it was time to start pushing the move into his full size bed. He kept saying “I want my baby bed”, and “I don’t want a new bed”, and then finally one day when I brought him to a mattress store to show him the big beds he got excited. He was ready to make the move. I was happy about this, and then I realized that meant he would be leaving the bed and mattress that he has slept on since he was a baby. The bed that started up super high and is now dropped as low as it can go. This bed has treated us well, and although it will be the same bed just converted to a full it won’t be the same. My baby is now going to be moved out of his baby bed, and now that I think about it I am so sad. When did this happen???

The reasons I decided to push the move to the bigger bed are many. First, my son is tall and he honestly is big for the toddler bed. Second, I have snuggled with him in that bed to read a story at night over the last year (once we moved into this house) and now that I am getting larger around the mid section it is getting harder and harder to fit. I honestly don’t want the reason that I can’t snuggle in bed anymore to be “the baby”. I think that will start jealous and bad feelings early on. Third, soon enough a real baby bed aka a crib will be in the babies room, and I really want the transition into the big bed to be complete before that happens. Although I know he still will associate the new bed with his old bed, I am hoping it won’t go over badly. All and all I want all the changes to come with the new baby to happen as gradually as possible. I want him excited about his new bed, and not rush him out of his baby bed just when the new baby comes, or just because mommy is too large to fit in it anymore.

But I never realized all the emotions that would go along with it. I should’ve guessed because almost every step in my sons growth has been VERY hard on me. It takes me a long time to adjust, and it never even crossed my mind what moving on from this bed would represent. It represents another stage in his growing up.

Another thought that hit me was that the glider that has always been in his room, one that we honestly haven’t sat in in over a year will now be moved out of his room and into the baby’s room. I LOVE that glider! And even though I take comfort that soon enough I will get to rock a baby in it, that doesn’t mean it doesn’t hurt that my first baby’s time of being rocked in that rocker seems to be over. Oh, I am sure that once I start to rock the baby in it that he will want to sit in it too, but it’s not the same thing. We spent so many long hours in that rocker and even though, like I said, we don’t use it anymore….it’s still another representation of what is past.

I wish I never thought beyond trying to get my son excited for his bed. The moment my thoughts shift from what he is getting to what we are giving up I want to cry. But I can’t. (well I certainly do in private..lol) In front of him I will focus on how exciting his new bed will be.