It’s Official: We Have A THREEnager

Home/motherhood/It’s Official: We Have A THREEnager
Previous Next

It’s Official: We Have A THREEnager 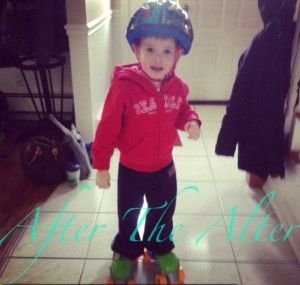 I know some people say that the “terrible two’s” are hard, but not me. As a matter of fact, my son’s two’s were actually rather pleasant. It wasn’t all sunshine and roses, but all in all my son was a pleasure. Maybe anything was better than what we encountered during the months of 20-24, but I have to say that two was a turn around for us. Then he turned three….and now, I sometimes look at him and say “what happened to my sweet little boy”? Where did this little boy with an attitude come from? How did we jump straight from toddler to teenager? The answer is we didn’t….I have what is called a THREEnager.

n. A three-year-old who displays the moodiness and attitude of a teenager. Also:three-nager.

The other day The Captain and I thought we were doing a great fun thing by taking our little man to the local children’s museum. How fun is that? The answer is it was not fun..not fun at all. My son threw tantrums and cried at least 3 times, and once even told me “I don’t want to listen to you”. Seriously? Who was this kid and what did he do with my little buddy?

He’s getting a mouth on him! Does any of this sound familiar in your home?  ME: “Do you want to go home”? HIM: “Yes” ME: “You won’t get ice cream tonight if you don’t listen” HIM: “I don’t want ice cream”  ME: “Put that in the garbage” HIM: “YOU put it in the garbage!” So how do you win? If he’s not adamant about NOT doing something, then he is whining while he does it. The noise just resonates through my ears!

If things continue with how they’ve been I see a bunch of battles in our future. That makes me sad. I hate to be frustrated in my daily activities with my boy. I have always enjoyed being with him and doing things with him (minus the months of 20-24). But this little boy with the tude needs to realize that mommy is in charge.

As they do in the jungle I think it’s time I start establishing my dominance. I hate to enter each day thinking we are entering the wild, or even a battle field but I am thinking that is my current reality. That makes me sad, but I guess such is motherhood. Any time I get comfortable with one thing, something new pops up to bring change.

I just want to raise a nice kid. I feel like so many moments during the day are teaching moments, and I want to be able to teach the right things. At night before bed when we are cuddling after about the third reading of his book he smiles at me, and plays with my hair and I melt. “There is my sweet little boy” I tell him, and he smiles. Let’s stay this way forever huh kid? What do you think?