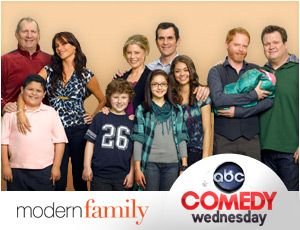 Last week was the first week that most of the fall shows were back in business. It was just wonderful! Most of the time I stick with the tried and true favorites, but this year I figured I would branch out and try some new shows. I used to love sitcoms, and I have found that I no longer really watch any. It’s sad, because I find when I do watch them, that they leave me laughing out loud, and this season I decided to give some a try.

My favorite new sitcom is called Modern Family and it plays on Wednesdays at 9:00 on ABC. This show had both me and my husband laughing out loud! It’s a great premise and the characters are awesome. Basically the show follows 3 families. Al Bundy from Married with Children is married to a much younger woman and has a step son. Then there is the husband and wife family with three kids, and finally there is a gay couple who just adopted a baby. Al Bundy is the father of the wife of the married couple, and the red headed man of the gay couple. Each family is hysterical. I highly recommend giving this show a try if you want a good laugh.

Another sitcom I watched last week was Courtney Cox’s Cougar Town. This follows Modern Family on Wednesday. I think this show has some good potential. I loved Courtney Cox on Friends, and I think her character on here is funny and lovable. The show is about a 40 year old divorcee, who is trying to find her place in the dating world. She finds that older men have it much easier in the dating world and get judged a lot less than the women do. She has a son who she embarrasses often. I think this show deserves a chance.

Finally the last new sitcom to hit my DVR last week was the show Community. Community right now has been following the office on Thursday nights at 9:30 on NBC, and I am hoping it moves to a different time slot so that I don’t have to battle with my desire to DVR Fringe as well as Grey’s Anatomy. (I’ll keep my fingers crossed) This show has a very funny premise that I feel hasn’t fully been done before. It’s about a group of people in community college and boy did they create a bunch of funny characters. The main character is that guy who used to host Talk Soup, and he is a lawyer who never went to law school. It turns out that he faked his transcripts, and can talk his way through anything. Once they found out they said he had to go back to college…FUNNY!

Sitcoms used to run the prime time TV schedule…what happened? The lineups are all filled with reality shows and hour long drama’s now. So I’m going back to the TV roots and watching 30 minutes of television that leaves me laughing and always wanting more.