My Guide To Sesame Place

My Guide To Sesame Place 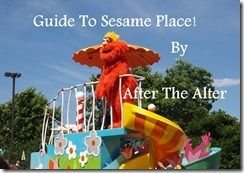 I am by no means an expert after visiting Sesame Place for the first time, but like everything else I do I have a TON of opinions on my experience! What’s new right? I grew up in PA and amazingly never have visited the park, (I’m not going to lie, I’m pretty upset about this) so I was super excited to finally get my chance. The Captain and I, along with 2 of our best friends and their son hit the road and conquered the park (ok maybe not conquered). This is what I thought…

When To Go To Sesame Place

I am lucky that both myself and Captain Awesome have jobs that are flexible. That is why I think we made the best decision ever and visited Sesame Place during the middle of the week. I worked at Wild Water Kingdom (Dorney Park), and I remember how busy it was during the weekends, and for some reason Wednesday’s were the most bearable. So we chose to go on a Wednesday. Not only that? We decided to go at the end of June right before the “true season” started. Normally, the end of June is nice weather wise, and we couldn’t have asked for a more perfect day. Hot enough to go on the water rides, but not too hot that the rest of the park was unbearable.

Sesame Place Is a Water Park

I think my biggest mistake of the day was wearing my “street” clothes to the park. If I had any complaints it was the lack of a changing area. We had to change in the bathroom stalls and it was just rough with a little guy. It would’ve been better if I just wore my suit all day. That way I could do the water, dry off and then do the non water rides. A bathing suit and cover up would’ve been suitable for both.

At almost 19 months we were limited to the water rides our little man could go on. For his age we were able to ride the lazy river, and have in play in the little lagoons. As for the non water rides, there were a bunch he COULD go on should he be a kid that liked rides. He hates being strapped in so we didn’t ride any. There were some great play areas though that he LOVED! Nets and Climb, Big Bird’s Court, Cookie Mountain, and Monster Maze were huge hits!

We got lucky and got spots for the first parade at 3:00. Keep in mind that people start laying towels down on the parade route WAY before parade time. I think it was because of the day and time of year we went, but the parade wasn’t too crowded. We got to see everything! Don’t worry where you are on the parade route because it makes stops all along the way, but I think placing yourself in the middle is best. If you are at the beginning the parade will pass you first, and if you are at the end you won’t get to see the first stop. So plop yourself down in the middle if you can!

The only show we got to see was Elmo’s World. All day there was a long line to get in to see that show, but not at the viewing we saw which was 5:45. I was told by another parent there that that time was when a lot of people are at dinner and getting ready for the 2nd parade. That made a lot of sense! I highly recommend this time.

I was so excited to do the character breakfast because we decided to not deal with the crowds to see too many of the characters in the park because we would get to see them at the breakfast. I wanted to see how our little guy would react. Unfortunately, like most things he wasn’t all that impressed. If I could pick any age group that would be perfect for this breakfast I would say ages 3-4. I think it may have been a bit of a waste for a 19 month old. That being said, we had a wonderful morning, and I loved sharing it with my little man.

I have to give a shout out to the Sesame Place staff. When we had a little mishap with our picture with Elmo I was very disappointed.. I really wanted that memory. But after speaking with guest services, they immediately worked with me to set up another private meeting with Elmo and we got a FANTASTIC family photo! They really were amazing!

Overall I thought the park was amazing. It was clean, bright and fun. It wasn’t too big and overwhelming, but was big enough to feel that you were getting your money’s worth. If you can get there during the week…DO IT! Like everything else when it comes to kids you have to be flexible. Try to work around naps if you can, and don’t force things on them if they don’t like it. What’s the point?

I am by no means an expert but I have a feeling some of you are.

So what are some of your great Sesame Place tips?

I was provided Sesame Place Park tickets for this review of the park. As always all thoughts and opinions are my own.