Our Night In Dublin

Home/travel/Our Night In Dublin
Previous Next

Our Night In Dublin

When you travel to Europe it seems like most of the time your trip begins with a stop in the larger city. This is due mostly because that is where the international flights fly to. I am not a city girl and could do without visiting cities, but our trip began when we landed in Dublin Ireland. We flew overnight and with the 5 hour time difference we landed around 8:30 am Dublin time. To our bodies it was 3:30 but we were advised to push through the tired and start our day. We embraced it and were very excited to get started on our trip so that is exactly what we did.

We checked in for our stay at the Camden Court Hotel. It was a bank holiday weekend (we weren’t sure exactly what that meant, but when we asked a local we were told “American’s like to have a reason or a person to celebrate for a holiday…we just don’t want to work) so we weren’t able to stay as close to the center of town as we may have wanted, but the hotel was great! It was like a normal city hotel, but we were very happy there for the 1 night we had to stay. 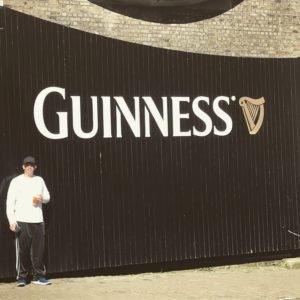 Once we dropped off our bags we grabbed a map and began our journey to the Guinness Store House which was on the top of our list. We were told to get there when it opened to avoid too much of a crowd and it seems that others got the same advice! That being said I am certain it got worse as the time went on. We LOVED it! People say the Guinness in Ireland is different and they aren’t wrong. We were told it’s the water, but whatever it was it was delicious. 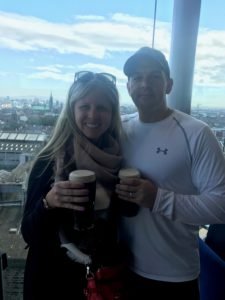 We enjoyed our pint that came with admission in the sky bar. You will be offered your pint in other locations but I recommend making it all the way to the top! The views are amazing! 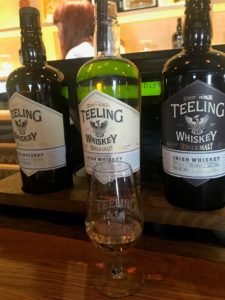 Yes, we were drinking by 11:00 am but when in Rome right? Next it was onto the Teeling Distillery to drink some Whiskey! Here we didn’t take the tour since the timing didn’t work out and it was rather expensive. BUT…we were able to go to the tasting room and try it on our own. What we learned pretty quickly is that the tax on alcohol in Ireland is ALOT! It certainly wasn’t worth buying any in the stores. It was a bummer because there were some not sold in the states, but we were told we can find them at the duty free shop on our way out. We learned that due to a smart business deal the Teeling brothers would be the first NEW distillery to open in Dublin in 100 years! They hit the ground running and already seem very popular!

After that we began our walk back to the hotel where we grabbed a quick bite and was ready for a nap. We hung on strong till about 3:30 but then I needed to crash! A nap was necessary. 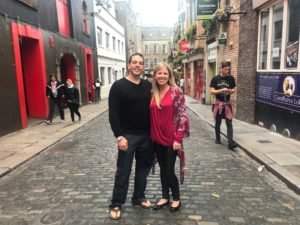 Once we did that it was time to head out to the Temple Bar region. We were told this is where the night life was. As it turns out the sun rarely shines in Ireland, and it was out on that Saturday. The people were out in droves! The streets were packed with people excited to be outside and share a pint in the sun. Keep in mind it stays sunny longer there due to being so north! I was not completely comfortable with the crowds and didn’t love the city atmosphere. Maybe it’s good for someone who doesn’t live near a city, but I live near NYC and don’t love it there…so I wasn’t extremely excited about the crowd. We tried to find a restaurant bar where we could sit and eat and that was a challenge due to the crowds. We also wanted to hear Irish music but it turns out that doesn’t start till around 9:30. So we picked a spot to eat and then later found a bar where we could sit and wait for the music to begin. That spot was recommended by our travel agent...The Stagshead . It was off the beaten path and we got a perfect spot for the live music and dancing. Perfect for our first night in Ireland.

After that we were understandably wiped. As I mentioned I didn’t LOVE being in the city and couldn’t wait to start our journey into the country. THAT is what I was excited to see. I wanted to be in the culture. I wanted to visit the small towns. In my opinion that’s the heart of the country, and the next day would start our journey to Kinsale. It would be our longest drive of the trip with stop in the town of Kilkenny to break it up. I couldn’t wait!