Onto Kinsale: Driving On the Other Side

Home/travel/Onto Kinsale: Driving On the Other Side
Previous Next

Onto Kinsale: Driving On the Other Side

After our night in Dublin we woke to find out that we WAY overslept (because someone…aka Captain Awesome SAID he was turning on his alarm and didn’t). We still had to get our rental car, but also wanted to get our included breakfast. So The Captain believed it best that he walk to the rental car place while I packed and checked out. This was a good plan for me because it gave me enough time to sit and eat a bit. I was super nervous about him driving on the other side of the road (because I doubted that I could do it myself, and even if I did I would just have to listen to captain Awesome tell me I’m doing it wrong). But he made it back to our hotel with the car and it was time to hit the road!

It’s funny because everywhere you look there is a reminder to look left! In the rental car, on the roads, on signs. It is a tough lesson, but one you had to figure out quickly. So off we went! This was to be our longest journey of the trip so we broke it up with a quick stop in the medieval town of Kilkenny. It was home to the Medieval mile with the highlight being the Kilkenny castle. 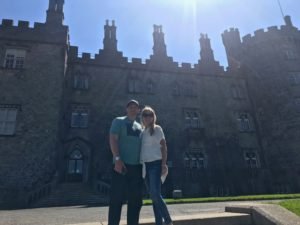 The castle itself was beautiful. We had a lovely sunny day again (which seemed to still be a phenomena), and that made it pleasant to walk through town. We did the self guided tour and then walked through town. We were anxious to get back on the road since we still had a long way to go so we didn’t spend too much time, but it certainly was a great stop! 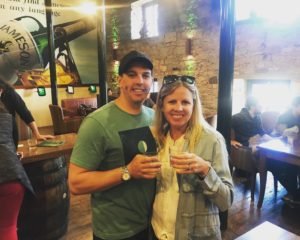 Next, we were excited to hit up the old Jameson distillery. Known as the Jameson Experience in Midleton, this tour led us through the history of how Jameson makes it’s Whiskey. This was a highlight for Captain Awesome since he loves to drink whiskey. I attempted to train for these types of events prior to the trip and I think that helped a little. It was a great tour and you even get some Whiskey at the end. Keep in mind the pours are a legit shot, so don’t think the people in Ireland are heavy handed….its actually the opposite!

Finally it was time to finish our journey into Kinsale. Another hour or so on the road. Due to all the fun we had all day we didn’t reach the town till after 4. Kinsale is a fishing town on the water. We had reservations at the Perryville House Hotel  , and when we pulled up to knock on the door we were told where to park. They said “Park here it will be the safest”. Yes, I was concerned too! I asked why , and was informed that Kinsale was hosting a very big Rugby tournament that weekend and the after party was in town. Picture spring break in the streets of of the town! They convinced us to eat just right up the road, not in town, and we agreed. Although we can handle ourselves at a party, we weren’t sure we wanted to be eating dinner in the middle of it! 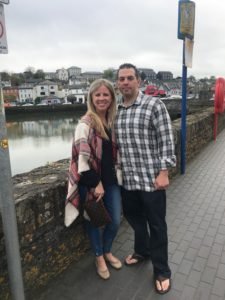 The hotel was adorable. Unfortunately, we didn’t get much time to relax and unwind there, but we were very happy with the accommodations. Its funny, because in these small inns/hotels you ring a doorbell to get let back in, and we left our room key at the desk so they would know who is in and who is out. Kind of nice! We walked up the street and stopped first into a bar called  The Spaniard . We were told it was a local spot and The Captain and I were excited to visit it. We had a pint, and loved the sleepy bar. There were old Irishmen sitting at the bar chatting with the bartender. It was exactly how an Irish pub would look in my mind (although funny it’s called the Spaniard!) We went across the street to our dinner reservations (I can’t remember the name of the restaurant!) , and instead of our plan of venturing back into town we decided to grab another pint in The pub. Boy am I glad we did! 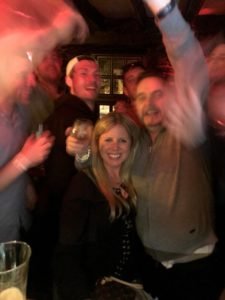 I couldn’t have asked for a better night in Ireland. It was exactly what we were looking for. We met two men (brothers in law) and they were so kind. We shared a pint…then two…then 3…which turned into them buying us each a drink of a rare Middleton Whiskey (yummy by the way).  As we drank the men burst into random Irish songs, and as they sang anyone who walked into the bar joined them. You can see some of this in the picture above! As the bar got more crowded with people from the rugby tournament more songs were sung. It was such a happy and jovial place! We met so many wonderful people, and enjoyed every moment of the evening!

That is until the next morning when I realized that I can’t be a tourist and a rock star at the same time…OUCH! I didn’t regret my night…but boy was I paying for it in the am….it was up and at em again. Time to drive onward to our next stop…all I could keep in my head was “don’t throw up….don’t throw up”…..