Home/TTC/Let The Testing Begin
Previous Next 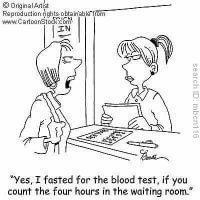 Have you ever been through a series of medical tests? A ton of bloodwork? I haven’t. I am thankful for that. When we decided to take the next step and see a fertility doctor I knew that I would have to be tested….alot….and I knew that it would be a pain in the A$$…but I did it anyway. I had to. But I don’t think they tell you exactly WHAT you are signing up for. It’s all about timing and doing the tests on certain days, and let me tell you that it becomes even more difficult that I have a son (which I am thankful for), and that I am a SAHM with out morning child care. But I did it…

I know I gave birth, but I hate giving blood. It hurts and it sucks. The first test that I had to do was give a ton…and I mean a ton of blood. I swear it was like 10 viles of blood. Enough that they asked if I would pass out or be OK to drive after. It’s a fasting test which means I can’t eat past 12 am the night before. So that meant that I couldn’t eat a thing before getting the blood test. So the best time for that is in the morning, but with the labs opening at 7 am and everyone and their mother who fasted showing up at 7 am I was left waiting at the lab for a while. I had to get in and out before Captain Awesome had to leave for work and that left me stressed. Not to mention that they literally had to take 10 vials of blood. Needless to say it kind of sucked.

After that I was left to wait for AF to arrive. Although I hoped she wouldn’t come, she did…and therefore the next test was cycle day 3 blood work which meant that I had to go on the third day of my period. Time sensitive tests are tough. Again I had to go first thing in the morning and wait with the masses.

Then I was told I would be having a water sonogram. That had to be done around cycle day 9…I was going out of town for my sisters baby shower…I was stressed. If I didn’t do it now I would have to wait a whole other month! Luckily I was able to do it on cycle day 8 (phew!) But that meant another blood test 2 days before the sono. Oh joy.

The doctor then decided she wanted me to get the “Tennessee Blood Test” No idea what that was exactly. But it had to be done IN the office but not when I was going to get the other blood work done because they don’t do that test during that time of morning. I was so frustrated! I am a SAHM and my son isn’t allowed to come into the fertility office (understandably) and I have to get blood work at certain times on certain days. What is a girl to do? Thank goodness a nice receptionist heard my frustration and allowed me to get the special blood test on the same day as my water sono blood test. Made my life a smidge easier.

Next came the water sono…..I think I’ll save this story for another post.

So I did all the initial testing to see if there is anything medically wrong. Most things they could find just take a simple solution such as taking baby aspirin. Others are a little more serious, but at least we may get some answers. One thing I like best is knowing that it’s their job to get me pregnant. What I like least is the stress of making appointments and finding child care during that time. It’s not easy to fit the schedule, but I guess we just have to make it work. Scariest part? We haven’t even started any treatment! Let’s hope we don’t get there….only time will tell.