The Infant Seat vs. The Car Seat

Home/baby registry/The Infant Seat vs. The Car Seat
Previous Next

The Infant Seat vs. The Car Seat 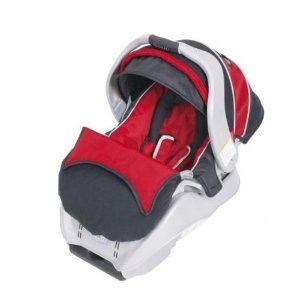 When I first went shopping to pick out our infant car seat the one thing I knew above all else was that I needed the lightest one possible (I ended up with the Graco Snugride Lotus). I was/am a huge wuss, and had no idea how I would carry both a child as well as that carrier once the baby arrived. Fast forward to the birth of our son, and I soon realized that I actually COULD carry that thing, and it wasn’t so bad. Fast forward again to today, and now I am beginning to rethink that. These days it is getting harder and hard to carry him in the infant seat. With the kid at about 18 lbs…plus 15 lbs of the carrier itself, that thing is HEAVY! But as I think it through I start to panic about the change in using a regular car seat…I have a feeling that won’t be easy either.

I’m used to the carrier. I plop him in it, and carry that sucker to and from the car. That is about as far as I can carry it. Any farther and it has to be put on the snap and go. I hate carrying it to run quick errands like the post office or the dry cleaner, but it’s too quick to take out the stroller. In those situations I begin to think it will be easier when he is in the regular car seat. But then I begin to think it through. At least in the infant seat I can put it on the ground. Once he’s in the car seat I have to carry him, and continue to hold him as I run the errand. How do I get in my purse? How do I carry the dry cleaning in?? Sounds complicated to me…

My infant seat can hold a child up to 22 lbs. We certainly aren’t far from that, but I doubt I’ll be able to carry it when he gets that heavy. So when do I make the switch? My thought is maybe wait until he can sit on his own. That way he will be able to sit in shopping carts and high chairs.

As with everything else with being a mom, anything new scares me. Once I get the hang of one thing, I have to switch it up and change. Why would car seats be any different? Now I just need to decide when….