I Should Let Him Starve

Home/motherhood/I Should Let Him Starve
Previous Next

I Should Let Him Starve 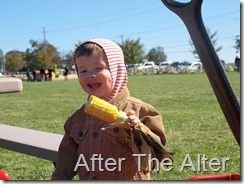 My son is the light of my life…but that feeling gets lost about 3 times a day when I attempt to give him nourishment. During those times I am about ready to do 2 things…1…hold him down, hold his nose and shove the food down his throat. Or 2…to just leave his plate uneaten and tell him he can starve the rest of the day.These days my actions fall in between but nothing seems to be working. I honestly don’t care to try anymore, and I wish meal time was a more pleasant experience. But it’s not, and I doubt it’s going to be for a while…so what am I to do?

I want my son to eat healthy. I do. When he was born I attempted to make my own baby food but failed. Then when he was able to eat regular food I tried so hard to give him healthy choices. I made my own cereal bars, I made egg quiches…and so much more. I spent a ton of time cooking only to have him turn his nose up at each thing before even trying it. How frustrating is that??

I understand how mom’s end up feeing pop tarts and chicken nuggets with every meal. I find myself asking myself “why bother?” I know the answer…because he’s 2 and I am the adult and need to keep trying to give him healthy choices. But man it’s hard! I wouldn’t necessarily call him a picky eater either..because he won’t even try! It’s one thing if I give him something and he spits it out. I respect that (cause I do the same thing!) but no…the food doesn’t even touch his lips!

What kid doesn’t like pasta? Mac and Cheese? Potatoes? Rice? Mine! His dinners include meat, fruit and usually a yogurt. For veggies I either have to hide them in his meat, or give him a squeezable packet. Almost every bite has to be shoved into his mouth. It’s a horrible habit I know…but it works. Sometimes it takes bribery to get him to eat. If he wants a toy at the table…”take a bite and I will give it to you”. He wants to watch Mickey “finish 4 more bites and you can watch Mickey”. It sucks.

Meals can take up to 45 minutes at a time just to get him to eat. In the end I normally win (with a little compromise here and there). But it isn’t pleasant. I get mad, and I want to yell. But I don’t. I know he doesn’t get it.

It’s not like he snacks either. For him food is something he would be happy with out. It baffles me. People say make eating fun…magic ingredients, allow him to help cook it…I’ve tried it all. He just doesn’t care one bit. He’s too smart to be tricked into eating. The “if you eat your spinach you will be strong like Popeye” line doesn’t work. “If you want to be big like daddy you have to eat” “do you want to be big like daddy?” to that I get the answer of NO!

So what do I do? I want to put food out, and if he doesn’t eat it tell him no snacks till lunch. But will he understand that? The reason I feed him each bit, and force him to eat it is because he is much more pleasant once he has eaten. It’s selfish, but the truth. But I fear I am creating a monster. It works for now…but for how long? There soon will come a time that I don’t control every meal he has. It’s then that I need to know I instilled good eating habits…at this point I would say I’ve been an epic FAIL in that department no matter how hard I’ve tried.

What worked for you?