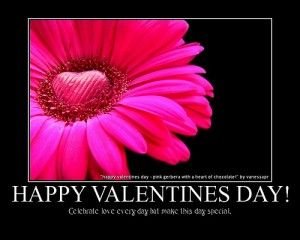 So these past few days I have really enjoyed reading posts about what other people do or don’t do for Valentine’s day. There are some that LOVE the holiday and some that HATE it. Some people celebrate some people don’t. Some people have men in their lives that plan out insanly romantic evenings and some people don’t….but no matter how you feel about Valentine’s day, it seems to be here to stay. And no matter what, each year…on February 14th that day will come around and guys..if you want a happy wife…try to think about what your wife REALLY feels about Valentine’s day. I think you’ll be happier for it.

I may be wrong, but I think women who say “I think Valentine’s Day is stupid” is like a man saying “I don’t like strip clubs”. I mean come on! I have to believe that deep down somewhere that a woman would love to have an insanly romantic evening planned for them. And of course that could and should happen any time during the year..but lets be honest. Sometimes men need a little push to get the ball rolling. So Valentine’s Day is a perfect excuse. That’s why I say it’s like men and strip clubs…you may say it all you want but I doubt if you as a man are ever “forced” to go to a strip club that you’d sit there with your eyes closed staring at the exit…you just wouldn’t so you can admit it. Men like naked women..bottom line. Just like women like romance…bottom line.

I was reading a post from My Husband Is Annoying and I had to laugh at both the post and the comments that were made. There were a few comments from men reminding women that men are not mind readers, and if you want something just say it. I think that sentiment goes back to a previous wifey 101 post titled: Fine vs. FINE. Basically we as women make the mistake of expecting our men to make the “right” decisions. But the truth is that they sometimes need to be “guided” towards that “right” decision. I just think we hope that our men will WANT to want to be romantic and sweet.

I don’t have the most romantic husband. He knows it and I know it. This year I said “no presents”. I meant it! So was I sad when I got no presents? No way! Would it have been nice to get a little “I really wanted you to have this” present? Sure! I kind of planned Valentine’s day. I picked the activity of what we’d do that day because to be honest I have learned it is better to just plan what I want to do rather than hold my breath waiting for him to plan the day, and I knew we’d go to the same restaurant we do every year. (sentimental reasons) Does this upset me? Not anymore…but would a nice “I planned everything..surprise romantic day” be nice? Of course!

So here is the point when it comes to Valentine’s Day. Men…more effort is never a bad idea. Women…don’t expect too much from your man. I don’t think it’s in most of their natures to be romantic. (yes I know there are some romantic gems out there) And remember…love isn’t only about one special day…it’s about sharing love every day. But it can’t hurt to “celebrate love every day, but make this one day special”.