Wifey 101: Messing With His Manhood

Wifey 101: Messing With His Manhood 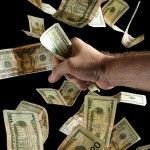 It’s amazing how horribly men and women communicate. I could say one thing to The Captain and he could totally hear something else…and in return he can speak to me, and I totally take it the wrong way. Is it the whole Mars/Venus thing?? Just recently I have found out one topic of conversation that truly sends our communication skills out of whack and that is MONEY and/or FINANCES. When it comes to these topics, it seems that I regularly hit a nerve and force him to become WAY oversensitive. But as it turns out it’s not just him that overreacts when this topic comes up..I am beginning to think that its ALL men that get all fidgety when the topic arises. Ladies, it turns out we are messing with their manhood!

The other day I was out to lunch with Captain Awesome and another male friend of ours. During this time the men were complaining about how irrational women are. Then, our friend proceeded to say that his wife isn’t happy with the new house. I was rather shocked because I knew that the couple had just bought the house, and as far as I was concerned she was very happy with it. So I asked him.. “What makes you say that?” He then proceeds to tell me that she told him that she wished she had something in the house…REALLY you took that to mean that she wasn’t happy with the house?? And as it turns out Captain Awesome agreed with him, and said that when women point out “things” that they don’t have, that they make the men feel that they aren’t PROVIDING FOR THEM! WHAT? I couldn’t believe what I was hearing. I mean, I always say I wish I had this or I wish I had that…isn’t that the American way? Isn’t that what dreams are about?

I have fallen into this trap before when I have made statements such as “we can’t afford this” or “we can’t afford that” when referring to an item that would be nice, but we truly don’t need. I don’t mean we can’t afford it necessarily (unless I’m talking about a Lexus or BMW), what I mean is that we could afford it if we REALLY wanted to, but in reality we have other priorities and don’t want to. Again, what The Captain hears is….my wife wants something and I can’t provide it for her.

I kind of get where the men are coming from though. This is the analogy I came up with…It would be like your husband pointing out wonderful food another wife makes. What you hear is that he doesn’t like your cooking…what he means is just that the other food sounds good too! (don’t worry I don’t speak man language often)

I do try to learn from my mistakes. I do my best NOT to say the things that I know “mess with my man”. (I fail often) So in true Wifey 101 form, I wanted to share with you all what I have found….Men get very sensitive when they FEEL that they aren’t providing their woman what they want and need….so be careful what you say! Who knew men could be so sensitive?? I know I certainly didn’t!