We Flew, We Saw, We Conquered Atlanta

We Flew, We Saw, We Conquered Atlanta 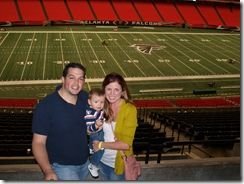 Ok, so the title was a bit dramatic, and maybe we didn’t conquer much, but we did fly to Atlanta, and we did see a whole bunch in Atlanta. Captain Awesome is a HUGE Atlanta Falcons fan, and has always talked about going to a game. So, even before our little cherub was born, we planned to go to Atlanta to celebrate The Captain’s 30th birthday, so that he could show his son his favorite team! So together with the two Grandma’s, Captain Awesome, the baby and myself flew to Atlanta to see the sites and catch a game! Go Falcons! 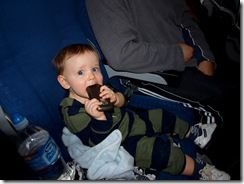 Flying to Atlanta meant that it was time for Christian to go on his first airplane ride! I was extremely nervous since he is such an active little guy, but I have to tell you he was such a trooper! I will do a separate post on flying with a baby soon, but the short version was that at 10 1/2 months he did great, although I will admit that I think 2 1/2 or 3 hours would be our flying limit at this point. You really can’t rationalize with a 10 month old!

We stayed at the Downtown Marriott Marquis. Great location if you want to be able to walk to all the tourist attractions. It’s close to the Coke Museum, Aquarium, CNN center and of course the Georgia Dome (which  we took an amazing tour of!).Other than that there isn’t too many stores and restaurants to wander to, but since we were only there for a few days it was perfect!

We did a lot of sightseeing and our little guy was such a trooper. I mean it…he was a pleasure to be with and took to the change in his schedule with stride. It was even our first time sharing a hotel room with him and he slept well (except for 1 night of course). It helped a lot having the Grandmas there for extra support. It’s always good to have an extra pair of hands. 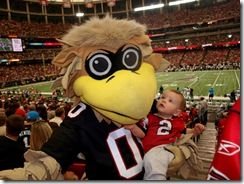 The culmination of our trip was the Falcon’s game. We had AMAZING seats and I even arranged for Freddie The Falcon to come and surprise The Captain and our little man during the game. Christian had to warm up to him but it was still pretty cool! The dome was soooo loud! Christian handled it very well and even slept in the Ergo carrier throughout the 3rd quarter through all the screams and music. I was surprised but extremely impressed. Funny thing is that the littlest noise at home will wake him…who would’ve thought!? Finally Captain Awesome got to cheer for his favorite team with out almost getting beat up (which he almost does every time he goes to see the Falcons here in NY!).

Well, we successfully took our first trip with the baby. Meaning a trip that required flying and a hotel. I was scared and nervous but it was great. I just hope my son continues to be so adaptable. Atlanta was fun. I just can’t believe that this trip that we have been talking about for so long has now come and gone. Next big trip? Disney Spring 2013!!!