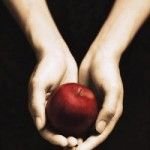 Yes, I know, I am like a thirteen your old girl when it comes to the Twilight series, but it comforts me to know that I am not the only one. Most females I encounter, with just one mention of Twilight begin to gush over the stories. I myself have read the whole series through, plus I read Twilight for a second time, as well as listened to New Moon on CD for a second time. Now, after this weekend’s DVD release I got a chance to watch the movie that I had already seen two times at the movie theater. (as I read back what I just wrote I see that others could find this all absurd, but I stand by my obsession.)

For those of you who haven’t read the stories (that is if you have been living under a rock) I will give you a little background before continuing to gush about all things Twilight. Here is IMDB’s synopsis of the book/movie

Bella Swan has always been a little bit different. Never one to run with the crowd, Bella never cared about fitting in with the trendy, plastic girls at her Phoenix, Arizona high school. When her mother remarried and Bella chooses to live with her father in the rainy little town of Forks, Washington, she didn’t expect much of anything to change. But things do change when she meets the mysterious and dazzlingly beautiful Edward Cullen. For Edward is nothing like any boy she’s ever met. He’s nothing like anyone she’s ever met, period. He’s intelligent and witty, and he seems to see straight into her soul. In no time at all, they are swept up in a passionate and decidedly unorthodox romance – unorthodox because Edward really isn’t like the other boys. He can run faster than a mountain lion. He can stop a moving car with his bare hands. Oh, and he hasn’t aged since 1918. Like all vampires, he’s immortal. That’s right – vampire. But he doesn’t have fangs – that’s just in the movies. And he doesn’t drink human blood, though Edward and his family are unique among vampires in that lifestyle choice. To Edward, Bella is that thing he has waited 90 years for – a soul mate. But the closer they get, the more Edward must struggle to resist the primal pull of her scent, which could send him into an uncontrollable frenzy. Somehow or other, they will have to manage their unmanageable love. But when unexpected visitors come to town and realize that there is a human among them Edward must fight to save Bella? A modern, visual, and visceral Romeo and Juliet story of the ultimate forbidden love affair – between vampire and mortal.

So what is the pull of the story? For me it’s the forbidden love, and the almost perfect man. Some people will argue (my mother) that it just doesn’t make sense. “Why is she so calm that he’s a vampire?” “it is so unrealistic!” and my answer to all that is “It’s not supposed to make sense!” It’s a story! I would say almost a fairy tale! The age old story of Romeo and Juliet! Two lovers who really are not meant to be but can’t pull themselves from each other. That is this story. Now, when I first saw the movie posters I was disappointed with the actor cased to play Edward. My vision of Edward while reading the book was just a perfect specimen! How could a real person play that role?? Enter Robert Pattison. I have to give this guy credit. In my opinion he played Edward extremely well in the movie. 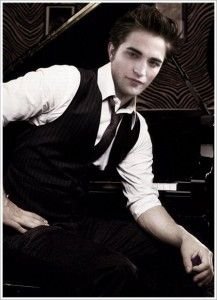 Now come on people look at this guy! And yes, again I must regress to the days where I used to scream over Joey Mcintyre of New Kids on The Block. I think my sister gave the best response. Her boyfriend texted her “I Love You!” and She texted back “I Love Edward!” This, my friends, is the real pull to the story. This vampire is super human, super sexy and totally in love with this imperfect human. He has eyes only for her, and has this desire to protect her no matter what. He would die for her in a second. The world cannot exist without her. I can go on and on but this is the dilemma. Does a man like this really exist? And please don’t say “no because there are no vampires” I am talking about the rest of it (although I think the fact that he is a vampire also makes him sexy).

I have been obsessing over this saga for a while now. My husband and family can attest, and although this post really has nothing to do with marriage I think the women out there will appreciate it. If you follow the saga and haven’t seen Stephenie Meyer’s site then I recommend you check it out! http://www.stepheniemeyer.com/twilight_outtakes.html They have some great outtakes from the book that add things to the story. My favorite is when Edward learns to cook from watching the cooking channel so he can cook Bella a meal before the prom…Sigh…… If you haven’t started reading these then please take my word for it. It is absolutely worth it!

So let’s start a bit of a discussion. What is it about Edward and/or Twilight that you love? Are you obsessed? I love talking all things Twilight so this is a great forum to do so!