Traveling With A Toddler: The Plane

Home/travel/Traveling With A Toddler: The Plane
Previous Next

Traveling With A Toddler: The Plane 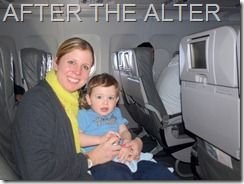 When you decide to take a family vacation the joy and excitement is quickly halted once you realize you have to bring your child on a plane. Especially when that child is like mine. One who rarely sits still, and who likes to throw fits every now and again. I guess I just described every 2 year old…but you know what I mean. For me, I was more terrified over how our 4 1/2 hour plane ride to Aruba would go. We did 2 1/2 hours when he was 10 months, but 4 1/2 is a different story. Therefore, the worrying began early…how would we make it? Would the rest of the passengers hate me? The question wasn’t if it’ was when! But I gotta tell you my son did AMAZING on the plane. I’m kind of bragging here, but on both there and back passengers in front of us told us how well behaved he was. I smiled and patted myself on the back a bit, but the credit goes to him. Here’s my story of what worked for us.

I think the 4 1/2 hour trip to Aruba would be our max at this point. I hear about people traveling to Europe and Hawaii and I have no idea how they do it. My son did great, but we definitely hit our Max.

Tips For Flying With A Toddler

Fly during times that work for your kid: Whatever those may be do it. It’s not about you and more mom and dad. It’s about what works best for your kid. We chose to travel early in the morning and it worked for us. Our flight there was 6:45. SUPER early and that sucked, but by doing it at that time our son slept a bit. The way home was 4:45. My son napped in his stroller through the whole check in process, and I “thought” he’d sleep on the plane at 7:30 like his normal bed time. He didn’t sleep at 730…he was up the whole time, but I still stand by my decision to travel at night when he would normally sleep.  Any time they sleep on the plane is time that you don’t have to attempt to entertain them. It’s also time that you don’t have to sit there waiting for them to throw a fit. Time like that is precious.

Prepare for the worst! My entire carry on was pretty much filled with things that could MAYBE occupy my son. I had a bag of tricks that would hopefully take his mind off of trying to escape from the plane.The funny thing was I didn’t need most of it, but it felt good to have it. Go to the dollar store and stock up. I bought sticker books, coloring books, crayons, lizard toys, glow sticks, picture find books and more…all at the dollar store. To him the toys were new. That makes them exciting.

VIDEOS ROCK! Before leaving I downloaded a ton of his favorite shows on my Kindle. I will admit I hate to give him electronics but it’s all about survival on the plane. This worked wonders for us. On the way home my son didn’t sleep a wink..but we had an army of shows to keep him occupied. Just think…if they can be silent for a 20 minute show…it only takes just over 8 shows to make it through a 4 hour flight. Not to ambitious if you ask me!

The most important rule? GO WITH THE FLOW! You can only do your best in the situation you are given. The other plane passengers will just have to deal with whatever happens.

I am by no means an expert on this subject. I count myself as lucky that he did so well. Next time he very well could be sliding under all chairs up the aisle like some lady told me her son did when they flew. Either way I feel lucky that our trip was a successful one. I will say he was entirely DONE by the 4 hour mark. He kept asking to go “DOWN”, but I couldn’t blame him. He’s 2!

Bottom line is to be prepared for your child. Do what’s best for them, and think about what makes them comfortable first. You are the adult. The longer they are happy and occupied, the longer you and the rest of the plane are happy. And that my dear friends makes for a successful trip!