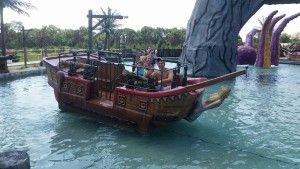 Splish Splash water park is a place on the east end of Long Island. Amazingly enough I had never been there even after living here all these years. Maybe it was because I worked at a water park and knew too much about behind the scenes, but until now I hadn’t made the trip. This week I decided that it was time to give it a try. Captain Awesome took off of work, and we invited my mother in law and together we hopped in the car with the two kids and hit the road. Here are a few of my thoughts…you live and learn, and I learned alot!

We decided to go on a Monday in the middle of August. The hope was that camps would be over and therefore the crowds would be less? I got concerned when I called for info on a Sunday and the message said they were at capacity and to come another time. Would it be crazy even on a Monday? YES! But I don’t think there is any way around that. On a hot day in the summer a water park is going to be crowded…bottom line.

We got there about 15 minutes after the park opened and it was already a mad house. Our first ride which we immediately jumped on took us about 15 minutes to get through. Not bad at all, but as time went on we could tell we were in trouble. The next ride? 45 minutes and it went up from there. This was not good. Not with a 4 year old and one person who had to be left behind to hang with the baby. This is when we saw the magical “other line” that got right on the rides. What is this wonderful line we asked? (don’t bother asking people with shirts that read “ask me about the H2Go Pass” because the shirt is a lie…they did not have a clue!) It was the H2Go line. It’s sort of like Disney fast pass and it gets you past the line. We decided way too late how necessary this pass was, and missed out. But if I can say anything it’s to get this pass. When we went the passes were $25 for regular and $45 for the premium pass. When I look online that cost is higher, and it goes up on the weekends. It definitely is a lot. Don’t get me wrong, but if we are already spending the cash, then next time its a must. We made it on 4 rides when we went. Certainly not enough. We even missed the lazy river due to the over and hour long wait. My son was bummed and we were bummed that we didn’t get on more rides.

We went back and forth as to whether or not to bring our own food and eat in their picnic area. No food or drink are allowed in the park. We were able to bring in a soft cooler that held food for her. We thought hey…we are only here for a bit…why deal with walking back to the car to get the food and eat? What did we learn? Bring your own food! I am not exaggerating when I tell you it took at least 45 minutes for Captain Awesome and I to get food for the family. We left my mother in law with the two kids and went to the snack shack ( i think it’s called). I felt like I was on candid camera. It moved so slow. At one point I felt as if no one was getting food! How could fried food be so difficult to get out? They say made to order but it was ridiculous. We most definitely could’ve gotten to the car and eaten MUCH better food. It shouldn’t take so long to get food…

I know that all parks are nuttty. I get that. It’s the nature of it all, but I can only speak of travelling with 2 little kids and even in the best circumstances it’s difficult. But waiting at least an hour for each ride just isn’t ideal. We tried hard to teach the “patience” lesson, but soon enough I was even losing mine! I couldn’t blame the kid for not wanting to wait in line. He LOVED the ride once he was on it. I was so proud of him, and impressed with the amount of rides that he actually was able to go on. He fell under the 42″ mark (just missed it but wasn’t worth risking the long line to find out he couldn’t ride!) but we figured there were about 8 rides he could ride on. We hit 4….to be honest he LOVED the kiddy area. Much more care free and in the words of Christian “and no lines!”.

We went on a Monday when camps were over. I can’t even imagine what the place looks like on a weekend! My guess is on par with any other water park out there. I would go back…I think….and I would like the H2Go pass. Actually I think an adult day would be perfect, but I’m not sure when that is happening. But we had fun. Like everything else in life you live and learn. We just know what we will do next time.