I have been asking The Captain to write on my blog for some time now. I thought it would be a great way for you to get to know him…well I guess I struck a cord with my last Wifey 101 post titled: Ignoring it will not make it go away, because this was the post that sparked his interest. So here is his rebuttal! Let me introduce you to Captain Awesome! 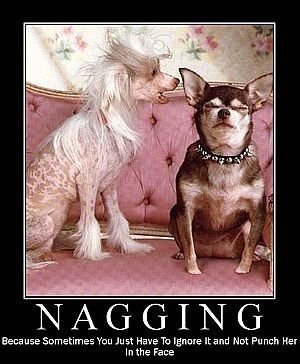 Of course my first blog post on this site is in defense of myself and all the men out there who read The Wife’s blog even though it is filled with random woman drivel.    Before I stand up for myself, 2 quick notes: (1) I like to link to a lot of stuff, but they all open in a new window so click away and you can always come back to read the rest of my Ramblings, and (2) Jen is referred to as The Wife, before that she was The Fiance, and before that she was The Girlfriend…this is really how I refer to her in real life.

I am not stupid enough (enough being the prime word here) to try and defend my texting while driving, and most of the time I am not texting I am playing a game at red lights.  I am here to defend myself against the nastiness that was said about us, men, in Wifey 101: Ignoring it Will not Make it Go Away.

First and foremost, I’d like to say my fish tank is 90 gallons of awesomeness, and is actually where I derive most of my power for being Captain Awesome (if you were wondering what makes up the other parts, they include drinking copious amounts of beer and scotch mixed in with a splash of wit and sarcasm – oh and don’t forget the dimples).   But we are going to ignore The Wife’s hatred of the tank and talk about the underlying issues.

According to Dictionary.com Nag is defined as,

to annoy by persistent faultfinding, complaints, or demands

If you just did it the first time, or with out me asking you then I wouldn’t have to say anything at all!

While I can’t control how you feel I am sure I am less likely to have a negative response if your reminder was a little bit more gentle vs. ‘faultfinding, complaints, or demands.’

And lets be honest, the things being asked of me aren’t not being done because of hatred or malcontent, I just forgot (like that double negative, I figured if you could use word play with the word, Alter, I could use double negatives).  There is no masterplan to let the garbage pile up until the rats of the world unite and take you as their bride, or “dehydrate you” by not replacing the water on the water cooler.

Maybe I was doing something more important when you asked, but most likely you asked me when I wasn’t listening.  Maybe I was playing online poker, drinking the aforementioend copious amounts of beer, procrastinating doing our taxes, or just maybe, I was doing the coding, designing, editing, adding widgets and plugins that keep this amazing site so fresh and so clean.

I am not sure how this is going to get played out as our lives continue, but I can tell you one thing if either of our parents (both married north of 30 years) are any indication, you may want to relax a bit otherwise the stress is going to kill you way before it kills me (I just linked to that site because it had the word Angina in the title and that made me laugh).  Besides if you die then who will tell me to take out the garbage ?

Woah, Way over 500 words and I have yet to even get to the issue that was the heart of The Wife’s post, but I don’t believe this is my fault.  I mean how could it be, did you see what made up Captain Awesome?  Beer + Scotch + Fish Tanks ^ dimples.   Yup, I brought it to the dimple power.

About the Author: ABC