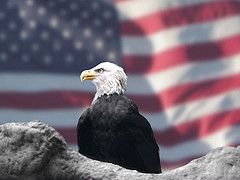 Ahhh the Fourth of July! A day that calls for BBQ’s and beer for the entire country. What a wonderful day to sit back and think about how great it is to be an American. I never truly celebrated the day until I started dating my husband. His family throws a HUGE party on the Fourth of July every year…fireworks and all. It’s a fun event and I am happy to now be part of the tradition.

I am proud to be an American. Almost to a fault sometimes. Growing up I never really considered other people’s background. Everyone to me was just an American. That’s not to say that I don’t honor my heritage or am not proud of my families history, but I never felt like it defined me. That somewhat changed when I moved to LI. People here are Greek,  Italian,  Jewish, Spanish and many other nationalities. People talk of marrying “their own kind”. Very different from how I grew up. I probably could not tell you one of my friends nationalities growing up. I still can’t today. To me, we were all the same. Maybe I grew up in a bubble. I can admit that…but I was happy.

Fast Forward to today where so many people hate America. (maybe they always did and I just didn’t pay attention). I sometimes ask myself why if people hate it here so much, don’t they try to go to another country and see if it’s really better? Texas wants to succeed from the United States? I say let them try to figure it out. The United States has always been a melting pot, but when people came here they dreamt of becoming an American citizen. Ellis Island was a place of hope and new beginnings. Now, people sneak into this country and hide. Instead of dreaming of becoming a citizen, they live here, don’t pay taxes and just take from our great nation with out giving back.

So tomorrow, July 4th, we will celebrate our independence. A feat that many great men and women fought for. And with all the hate there is in the world, try to look beyond it and think about the good. Try to see how lucky we really are. And while doing so enjoy a nice juicy burger and a nice cold beer….sit in a lawn chair in the backyard and enjoy some fireworks. That’s what July 4th is all about!