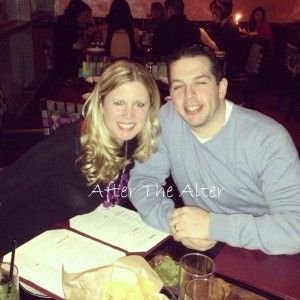 Life has been SUPER busy over the last few months, and almost every chance The Captain and I get to go out it’s never just for us. I plan my life by the month (as sad as it is) because I never know if I will be pregnant, so the last time AF showed up I decided that Captain Awesome and I needed a break. A getaway that allowed us to just have a good time and relax. The same day I made that decision in the mail came an advertisement for FREE rooms in Atlantic City at Harrah’s, so I booked my mom and we booked our little mini vacation to Atlantic City.

I haven’t been in YEARS! As a matter of fact the last time was when I went to my sister’s Bachelorette Party when I was pregnant with our little dude. I don’t gamble, so AC isn’t always our first choice, but being the rooms were free I couldn’t pass it up. I just wanted some time where we could go away…SLEEP IN….and let loose. Did I mention sleep in? And as long as our destination had a king sized bed (I love King Sized beds) then I was good to go.

The weather tried to derail us a bit. We decided to leave Friday night so that we could wake up and spend a full day in Atlantic City. The weather was FREEZING and the roads were a bit icy but we left anyway. The good news is that no cars were on the roads, and we made it there safe and sound. That night I didn’t even want to do a thing. We opened up a good bottle of wine, watched Friends on TV and I went to bed at a decent hour. Captain Awesome on the other hand hit the casino, but I was happily asleep in a comfy bed.

The next morning I slept till 9:15!!! How great is that? What wasn’t great was waking up to a text saying that our house had NO HEAT and our son and my mom were freezing at 57 degrees in the house. Our oil burner had stopped working. My poor mom was scared to call and wake me because she knew I wanted to sleep in. Now that is love! Luckily we got her to reset the system and it turned on. Crisis averted.

We spent the afternoon by the Harrah’s Pool. Have you ever been? It’s in a clear dome with palm trees and feels rather tropical. They had a DJ playing some of my favorite songs from college (think..Wyclef, shaggy, and more). We sipped on some beers and enjoyed the afternoon. It felt like we were away..you know what I mean? It didn’t feel like January in Atlantic City. I liked it.

After the pool I read and took a long nap while The Captain gambled some more. It was heavenly! Dinner wasn’t till 9 (since The Captain told me we didn’t need reservations in advance we couldn’t get a better time…I don’t know why I listen to him!), so it was nice to lounge around and take my time getting ready. I feel like I am always rushing so it was nice.

Dinner was at Dos Caminos. The service sucked! I had to yell at the waitress to stop taking away my silverware while I was still eating! Who does that? She even tried to take away a side dish that we were still eating out of. I almost bit off her hand. She’s lucky I refrained.

I drank a little too much that day and night, and went to bed a little later than I wanted (but not as late as Captain Awesome who rolled in at 4 am from the casino!). That means that we both woke up feeling a little crappy and the great sleep I got the day/night before was all for nothing. But what the hell? We had fun!

Overall, it was a much needed getaway for us as a couple. Life gets hectic, and stressful and it’s always nice to just get away and laugh with your husband. As I always say…it’s important to keep your marriage strong to keep your family strong, and a little time away is a great way to do that.